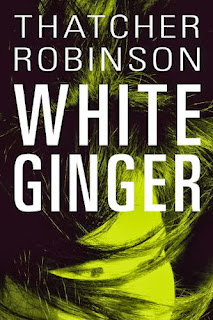 Fierce loyalties, staunch compassion, and a weakness for strays lead Bai Jiang--San Francisco's best known souxun, or people finder--into violent conflicts that test her pacifist beliefs in the brutal world she lives in.

Armed with Buddhist philosophy and wicked knife skills, Bai Jiang works at being a better person by following her conscience, while struggling with what she likes to think of as "aggressive assertiveness."

White Ginger is a debut novel and another new author to add to the growing list for this year.  It’s a thriller-cum-crime novel.......someone please tell me the difference.......set in the Chinese community of San Francisco. Our protagonist, Bai Jiang is female and a single parent with a 12 year old daughter. Her daughter’s father, Jason is a ruthless triad killer. Bai, despite her family’s history and triad connections is trying to forge her own path within the Chinese community, but outside of organised crime.  She is a people finder, well schooled in a myriad of martial arts and not averse to using her skill-set when necessary.

Initially we are on the trail of a missing girl which leads from San Francisco to Vancouver. Bai reluctantly enlists the assistance of her ex-partner, Jason in hunting down the pimp who has taken the girl there to be sold. Bloodshed, confrontation, violence and death follow as the girl is retrieved. A lot of the violence concerns triad inter-gang feuding and a struggle for ascendancy within the movement by Jason.

Our story then evolves into something else, with Bai targeted for death for reasons wholly unrelated to the initial premise of the book. I liked how Robinson switched track on us, whilst still keeping the first thread alive, albeit on a back-burner.

I enjoyed this look at the San Franciscan Chinese community. Bai’s friendships, family and business relationships seemed for the most part confined to fellow Chinese, though she does interact and form relationships outside of this. She’s likeable, confident and assured in most things, but retains a weak spot for her ex. This complicated relationship adds a lot of the humour and fizz to the novel, with a further high coming from the inter-actions between Bai and her gay-live in friend-cum-housemate-cum-protector Lee Li.

Overall a great read and at 290-odd pages it’s long enough to develop characters and story, but short enough to be a quick satisfying read. One of the methods I use it to measure a book’s enjoyment, is to ask myself if I would like to read more about the characters and more form the author.......in this case – yes to both.

My thanks are due to Lisa at Prometheus/Seventh Street Books for my copy of the book. White Ginger is available from the 15th October..