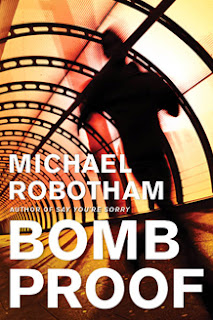 Sami Macbeth is not a master criminal. He's not even a minor one. He's not a jewel thief. He's not a safe-cracker. He's not an expert in explosives. Sami plays guitar and wants to be a rock god but keeps getting side-tracked by unforeseen circumstances.

Fifty-four hours ago Sami was released from prison. Thirty-six hours ago he slept with the woman of his dreams at the Savoy. An hour ago his train blew up. Now he's carrying a rucksack through London's West End and has turned himself into the most wanted terrorist in the country.
Fast, funny, hip and violent, Bombproof is a non-stop adventure full of unforgettable characters and a heart-warming hero - Sami Macbeth - a man with the uncanny ability to turn a desperate situation into a hopeless one.

Michael Robotham is an author who has been recommended to me as someone who I would probably enjoy reading, advice I have managed to ignore until now. Robotham has to date authored 9 novels – 3 standalones and 6 in a series with psychologist, Joseph O’Loughlin. Lost and Shatter, both from his O’Loughlin series have won the Ned Kelly Award for best novel in 2005 and 2008 respectively.

Verdict......boom, Robotham blew me away with this one!

There’s a lively cast of characters.......a bent cop, a retired cop – still troubled by the old case and the villain who got away from him, the villain – now Mr Clean, hobnobbing with Judges and Politicians, but still dirty in his dealings, his deviant son – a chip off the old-block but lacking his father’s intelligence and cunning, another wannabee crime king-pin, pimp with a ruthless enforcer, various low-level drug dealers, users and general low-life scum. Add Sami Macbeth, fresh out of jail after serving a stretch for possession; then throw in his beautiful sister, Nadia who has suddenly disappeared from her flat.

Macbeth thinks he can get his life back on track after being turned over by the justice system.  Other people have plans for him though; plans which involve turning Nadia into a crack-addicted whore who’ll dance dirty for another hit from the pipe. If Tony Murphy can persuade Sami into utilising his legendary safe-cracking skills on an evidence locker at the Old Bailey, maybe he can save Nadia.

When the Old Bailey gig goes pear-shaped and Sami’s shadow inadvertently blows up an underground train, Sami and his rucksack have all of the Met’s finest hunting him down.  It’s hard to save yourself in these circumstances, let alone your sister.

Overall, a fast addictive read at just over 300 pages. Funny and furious. I’m sorely tempted to try more from the author.......if only the TBR pile wasn't so big, if only I had more time, if only I didn't work for a living.

Bombproof was originally published in 2008 and has just been being re-issued by Mulholland books. I obtained access to this title after receiving an invite on Net Galley.
Posted by col2910 at 05:36