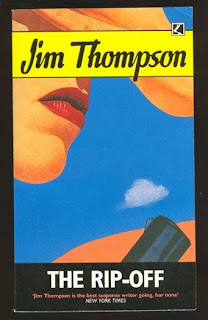 Is Manuela Aloe a gift from heaven or the girlfriend from hell? From the moment Britt Rainstar starts seeing the curvaceous heiress, he finds himself menaced by vicious dogs, stalked by pistol-packing skeletons, and attacked by an unseen assailant in a hospital lobby. Couldn't Manny just send flowers?

My last Jim Thompson read was 3 years ago in October 2010, back when I was recording what I had read books-wise but wasn’t penning any thoughts on them. The book at that time was The Alcoholics and to be truthful I can’t really remember what I thought of it, good, bad or indifferent.

This time around The Rip-Off was my Goodreads Pulp Fiction group read for September.  Published posthumously around 1985, the book has mixed reviews on Amazon US. The 1-star reviews outnumber the 4-stars by 3 to 2, with a couple in-between and no-one rating it as a 5.

My thoughts...... short-ish at 220-odd pages which was a plus point, particularly in view of the fact that the menacing of Britt Rainstar and the whole plot or premise of the book, I felt indifferent to. Some on-line comments on the book, regard it as an attempt by Thompson to pen a comedic novel, something I wouldn’t necessarily agree with though it did have some humorous moments.  I felt a lack of tension as the book unfolded and irrespective of Rainstar’s ultimate fate at the end, I was already looking forward to my next read.

Thompson doesn’t shy away from describing some of the bodies less savoury functions and I guess he was ahead of his time in respect of trying to push boundaries a bit further. Nothing too graphic, but did it add to the story, or was it included to satisfy his own whims? Who knows? As a separate observation, one thing is probably sure though, I don’t think too many of his protagonists died lacking for sex.

The posthumous nature of the book’s appearance after his death has me wondering whether it was an attempt to cash in on his restored reputation. Had it been rejected and refused when he was alive? Too weak? Some publishing notes at the front of my Corgi paperback copy, advise that when he died in 1977, none of his books were available in print in the US. Critical opinion of Thompson has grown in the intervening years and he is ranked with other hard-boiled masters such as McCoy, Chandler and Hammett. The critics probably didn’t have The Rip-Off in mind when re-evaluating his place in the pantheon.

Toying between a 2 and a 3, on balance I’ll give it a 2 from 5.  Not the worst book I have ever read, by a long shot, and whilst I didn’t want to attack myself with a scissors when reading I would hesitate to recommend it.

I have read and enjoyed a fair few of Jim Thompson’s books in the past and will do again in the future, and if this is his weakest at least it’s out of the way.

I acquired my copy second hand recently, as I couldn’t find the original among the chaos of my library.