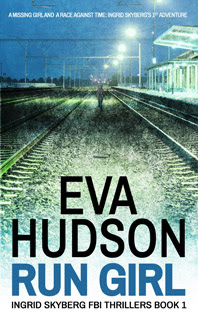 "If you love thrillers, don’t miss this action-packed novella!"

Enjoy the ride in this fast-paced FBI thriller as one of the toughest Special Agents ever to come out of Quantico buckles up for her first adventure. Resourceful and tenacious, Ingrid Skyberg is virtually indestructible: she can take whatever her adversaries throw at her and still get up for more.

BOOK DESCRIPTION: In Europe to help broker a peace deal, Secretary of State Jayne Whitticker is in the middle of delicate negotiations when her wayward granddaughter goes missing in London.

Special Agent Ingrid Skyberg is hauled out of her FBI training session at Scotland Yard to lead the hunt for the 18-year-old. The problem is, Ingrid has only one lead, just a few hours and can't call in the local cops for back-up.

Will Ingrid find the girl in time? Or will her failure lead to the collapse of crucial peace talks?

Run Girl sets the scene for Ingrid’s future adventures working out of the US embassy in London. If an American citizen lands in trouble… or winds up dead… or gets accused of a crime they didn’t commit, Special Agent Ingrid Skyberg is on their case.

The first instalment in an up-all-night crime thriller series—perfect for fans of strong female protagonists, thrillers with a twist and who like a little romantic intrigue on the side.

First book of a new reading month and an okay start - nothing too amazing and not too objectionable about Run Girl. No major pulse raising scenes and conversely I never felt the urge to doze off reading it either.

There are three strong females central to the book - the US Secretary of State who is involved in delicate peace negotiations, her strong-willed granddaughter who has done a runner to London and Ingrid Skyberg who is an FBI agent tasked with tracking down the missing teenager before anyone - especially the grandmother twigs she is missing.

The girl is clever and resourceful and the agent is always one step behind, pretty much throughout. We have a London setting mostly and bit of a blast chasing the teenager around the capital, with a helicopter jaunt out to the sticks, for a bit of questioning-cum-intimidation on a possible boyfriend and a return to the capital for a gown fitting and a date at a fundraising ball - information advising Ingrid that the missing girl will be in attendance.

Ingrid is partnered with an independent male intelligence operative - not FBI, not official, and there's a bit of banter between the two. Along the way we encounter a bit of misogyny and sexism at the hands of an MP and our borderline black ops style questioning is done by the male help, something Ingrid isn't too enamoured by. We also learn more about Skyberg during the course of the case. She has a fiance back in the US, one she doesn't seem to be too close to, she hates shopping, can't dance, is a nightmare in heels and is uber-smart and competent - a proper tomboy with brains.

We get a successful resolution to the investigation. The girl is returned to her grandmother, the peace talks are fruitful. Everyone lives happily ever after. A new career opportunity opens up for Ingrid where she gets to remain in London and Hudson can write more books about her.

An okay read, nothing to elevate it above the ordinary though. Hudson's strength is strong female characters and there's nothing wrong with that, though maybe she ought to dial back a bit with the girl power theme to win herself a few more male readers. Not every male character is depicted negatively here, just a couple.

Run Girl is the first in Hudson's Ingrid Skyberg series of which there are six in total. She has a few other books to her name, including The Last Ride which I read a few years ago. She died in 2015.