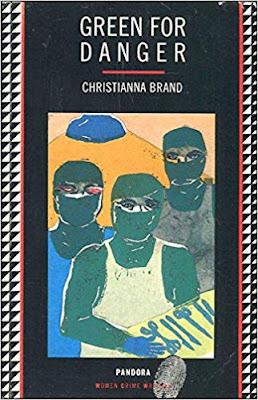 'SUPPOSING IT WAS SUICIDE,' HE SAID.
'MY DEAR, IT WASN'T SUICIDE. SUICIDES DON'T DRESS THEMSELVES UP IN THEATRE GEAR AND LAY THEMSELVES OUT ON THE TABLE.'

IN THE BRILLIANT LIGHT OF AN OPERATING THEATRE, DURING LONDON'S WAR-TIME BLITZ, THE PATIENT IS MURDERED - A HARMLESS OLD POSTMAN. AND ONE OF THE SIX MEMBERS OF THE THEATRE STAFF MUST BE THE MURDERER.

SOON THE WHOLE HOSPITAL SEETHES WITH MYSTERY. A NURSE, CREEPING BACK TO THE THEATRE AT DEAD OF NIGHT IN SEARCH OF A CLUE, ENCOUNTERS A MASKED FIGURE WITH SURGICAL SCALPEL RAISED. THE TAP OF AN UNLIT GAS FIRE IS TURNED ON. TABLETS OF MORPHINE DISAPPEAR...

NOW BACK IN PRINT, THIS CLASSIC CRIME NOVEL BY CHRISTIANNA BRAND WAS THE BASIS FOR THE SUCCESSFUL FILM OF THE SAME NAME.

Tense and claustrophobic, an enjoyable murder mystery in a Kent hospital, set against a backdrop of German bombs during the Second World War.

Slightly confusing to begin with as I was quickly introduced to a plethora of characters in rapid succession, and unfamiliar acronyms for wartime medical corps - eg V.A.D. -  things soon settled down.

A man is brought into the hospital, a casualty of an air raid and he waits overnight for surgery the following day. His operation goes wrong and he dies on the table. An accident? Apparently not, as a second violent death occurs afterwards. The list of suspects is confined to our cast of nurses and doctors. Inspector Cockrill endeavours to get to the bottom of things.

I liked it without feeling like it was the best book ever. It's interesting how the book unfolds. We get the low-down and histories of our characters - unhappy losses of the past, grief, mortality, love affairs - current and previous, hopes for the future, unrequited feelings, casual cruelties, poor behaviour, kindnesses, friendship, loyalty, annoyances and slights and under it all - one of them a murderer.

Each character, discusses how they in turn could have done the deeds and their motives for such an act which is quite clever. They chat openly among themselves, while all the time Cockrill gently applies pressure on the group by having them confined, followed, watched, accompanied and eventually unnerved until the guilty reveals themselves.

Brand tempts the reader to try and guess the identity of the guilty. And I guessed wrong, though I did spot the significance of a loss to one of our characters and the connection to our first victim. 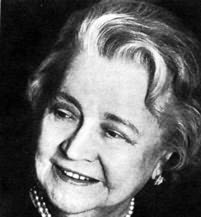 Enjoyable overall. Not too long, though it seemed to read longer than it actually was, particularly when I was orienting myself at the beginning. The second half of the book sped by. Nevertheless, despite my enjoyment of the book, I'm probably done with Christianna Brand.

Brand penned over 20 novels in her career, including six (maybe seven) with Cockrill at the helm. She died in 1988.

Other thoughts on this one from blog friends.