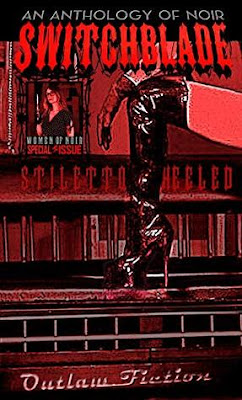 
In keeping with the all-female reading theme for November, this Switchblade anthology was a perfect fit and a bit of a change up from the longer works I'd been reading in the month.

In chronological order we had....

Cindy Rosmus – Dishes, Dishes, Dishes - a restaurant kitchen, a mass of dirty pots and pans, some co-workers arguing and a big knife that ain't getting used for chopping vegetables ...

Ann Aptaker – Ring, Buzz - a persistent phone call (or two), a gun, a decision, some chocolate ice cream and a reassessment of our options, the bloody phone again...

Susan Kuchinskas – Concrete Blonde - some sisterly love (not), a shakedown, an orgasm, a knife...

Susan Cornford – A Shot at Being Ordinary - referencing a female serial killer...

Tawny Pike – Deadly Dance in Jacksonino County - the matriarch, her two sons, a criminal enterprise - a family concern, some dodgy cops that have to go, a gun and knife fight and one son launching a hostile takeover.....

Charlotte Platt – Strong-armed and Dangerous - an old lady with chops, going out on her own terms....

Sarah Jilek – The Amazing Dancing Pig - a children's birthday party, a tale about a tail, and some bloody payback...

Sarah M. Chen - Influencers - a pushy mother, dreaming of fame, fortune, celebrity and money through her kids, one dies, the other one better step up ......

Bethany Maines – Mayhem & Mahalo - card games, a rip-off, a violent confrontation and a big sister to make it alright....

Serena Jayne – Crazy Eights - a tale of betrayal in Vegas, an unreliable boyfriend ...

Carmen Jaramillo – A Sinner at the Hands of an Angry God - a Black Metal past, a new life, a blackmail threat and a problem solved....

E.F. Sweetman - Mouthbreather - the insurance game, a family business, a long-term plan, an idiot son, one humiliation too many, a fatal consequence....


Lissa Marie Redmond - Hardball - a new job, a set-up, an accommodation and a turning of the tables with some shiny recompense....


I really liked this collection and blasted through it in just over a day. No two stories the same...... knives, guns, cards, drugs, Vegas, sex, amputation, a restaurant, celebrity, insurance offices, an alley, an apartment and a whole bunch of women that ain't getting pushed around and who mostly come up smelling of roses.

Of the contributors I've heard of more than a few and may have sampled their work at various on-line short fiction sites. Sarah M. Chen (Cleaning Up Finn) is the only contributor I've read at length.

Nothing sucked - all were enjoyed. Personal favourites were Charlotte Platt's Strong-armed and Dangerous and E.F.Sweetman's Mouthbreather, but they were all very good.