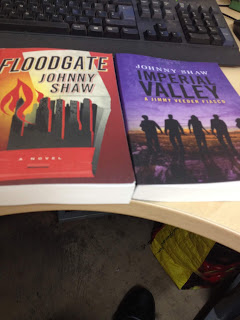 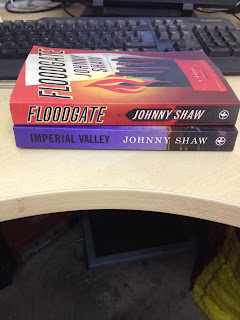 Two this week from another author whose books I like the sound of, I then go and buy and then promptly forget about - Johnny Shaw.

To date Shaw has five published books with a sixth The Upper Hand due out next month.


Floodgate is a standalone, as is 2012 release Big Maria - a novel which won the Anthony Award in 2013. Dove Season and Plaster City precede Imperial Valley in his Jimmy Veeder Fiasco series. 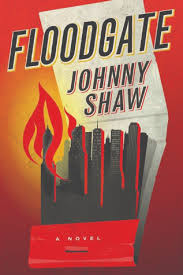 Andy Destra is a mostly honest cop in the most notoriously corrupt and crime-ridden city in America: Auction City. After discovering explosive information that reveals corruption within the highest levels of the police department, Andy is kicked off the force, framed, and disgraced, left to wage a lonely one-man crusade against conspiracies he can't prove.

Andy's investigation plunges him into a blackly comic maelstrom of one-armed gang members, slick pickpockets, criminal syndicates, hired mercenaries, escaped convicts, sewer dwellers, and one sinister ice cream truck. At the same time, he must contend with a mystery closer to home: the true identity of his parents, his most unshakeable obsession. Understanding their past may be the key to Auction City's future as it teeters on the brink of chaos.

If Andy can't solve this case, the Floodgate will fail...and his city will burn. 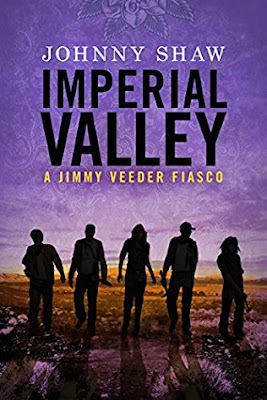 Jimmy Veeder has finally settled down, completing his dramatic transformation from hell-raiser to family man. With his new wife, Angie, and eight-year-old son, Juan, he lives the quiet life. No trouble, no problems.

Or so he thought. But this is Jimmy Veeder's Fiasco, after all.

The night after his wedding, Jimmy is lured right back into a world of danger and mayhem when childhood friend Tomas Morales, the current crime lord of Mexicali, turns up on his doorstep offering information about the whereabouts of his son's grandfather, for whom Jimmy has been searching for years.

The trip immediately careens into chaos when they find themselves shadowed by thugs, shot at by cartel soldiers, and forced into a confrontation with a violent, volatile drug lord. The fight spreads from Sinaloa back to Jimmy's doorstep, putting everything Jimmy cares about directly in the crosshairs.
Posted by col2910 at 23:35