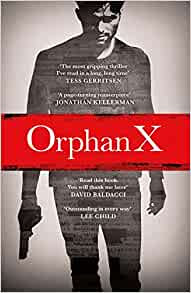 Synopsis/blurb ...
'Do you need my help?'
It was always the first question he asked. They called him when they had nowhere else to turn.
As a boy he was chosen, then taken from the orphanage he called home.
Raised and trained as part of a top-secret programme, he was sent to the worst places in the world to do the things his government denied any knowledge of.
Then he broke with the programme, using everything he'd learned to disappear. He wanted to help the desperate and the deserving.
But now someone is on his tail. Someone who has issues with his past. Someone who knows he was once known simply as Orphan X.
An enjoyable thriller, which started great (two pages) went a bit wonky (next 10) then thankfully got back on track and was consumed quite quickly.
Orphan X or Evan in civilian life helps desperate people for a living while avoiding personal entanglements. Or at least he did before this book. Helping? Yes, that's consistent. Emotional involvement? Well he breaks that rule here.
I quite like the one man Good Samaritan trope and it works well here. We get some background to his training and previous missions and the demise of his mentor and we pick up with his ethos of helping desperate people. Only here someone has his number and he's getting targeted. The history and details are dropped in seamlessly through the present day story.
Lots of conflict, lots of action, a main character with his heart in the right place and the skill set to take it to the bad guys regardless of his own personal safety. Without feeling I was ever reading anything bordering magnificence, I did enjoy this one and there's were ticks in plenty of the boxes - pace, story, character and outcome. An LA setting always works for me as well.

There are about 7 full length novels in the author's Orphan X series. I'm not averse to reading more in the future. I might have the second in the series, I can't remember.
Overall - an enjoyable read but one I may struggle to remember in a few month's time.
4 from 5
Read - October, 2021
Published - 2016
Page count - 404
Source - purchased copy
Format - hardback
Posted by col2910 at 05:15