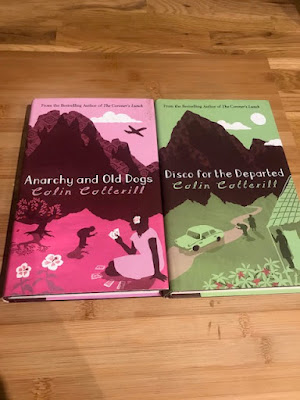 Cotterill has penned over a dozen books in this series, since The Coroner's Lunch dropped in 2004. And I haven't read any of them despite acquiring three or four.

I visited Vietnam more than a few times in my reading over the years, but can honestly say Laos will be a new location for me. 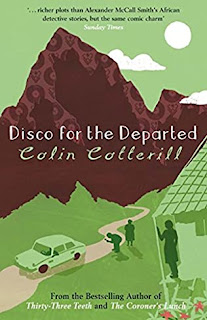 Colin Cotterill made a considerable impression with his previous novel The Coroner's Lunch, a book that succeeded in being something entirely new in the crime fiction field. His protagonist, the elderly coroner, Dr Siri Paiboun, was something unusual in the genre: in his 70s, but still immensely sharp, struggling with his career in the 1970s as the only coroner in Laos, a country which is a hotbed of dishonesty and corruption.

That book won the author many friends, with favourable comparisons being made to the novels of Alexander McCall Smith (but always in Cotterill's favour - his narratives wear a darker hue than that of the more cosy world of McCall Smith). And here is Dr Siri again in the equally diverting Disco for the Departed, which is in fact, the third outing for one of the most entertaining crime protagonists around. Siri finds himself summoned to the mountains of Huaphan Province -- the very region where the totalitarian Communist rulers of the country hid from the authorities before their own accession to power. But as celebrations are underway for the 'success' of the new regime (which, of course, can do no wrong), a human arm is discovered sticking out of a concrete walk, which has been laid from the president's cave hideout to his splendid new home under the cliffs. Siri is handed the job of uncovering the arm (and the body to which it is attached) and identifying the corpse. His autopsy reveals that the body was buried alive, but in order to track down the killer, the elderly pathologist has to call on some of his supernatural skill (which readers will remember from the earlier books - and the one element of Cotterill's work that some of his admirers have an ambiguous attitude towards). What Siri uncovers is a very rich brew of mysteries. 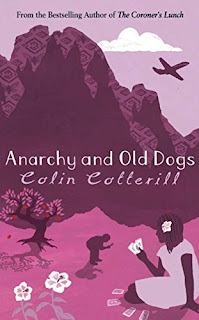 A blind retired dentist has been run down by a logging truck on the street in Vientiane just opposite the post office. His body is duly delivered to the morgue of Dr. Siri Paiboun, the official and only coroner of Laos. At the age of seventy-four, Dr. Siri is too old to be in awe of the new communist bureaucrats for whom he now works. He identifies the corpse, helped by the letter in the man's pocket. But first he must decipher it; it is written in code and invisible ink. The dentist's widow explains that the enigmatic letters and numbers describe chess moves, but they are unlike any chess symbols Siri has previously encountered. With the help of his old friend, Civilai, now a senior member of the Laos politburo; Nurse Dtui ("Fatty"); Phosy, a police officer; and Aunt Bpoo, a transvestite fortune-teller, Dr. Siri solves the mystery of the note and foils a plot to overthrow the government of Laos.