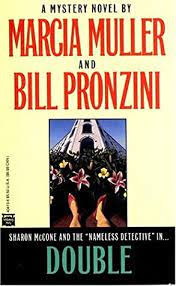 Synopsis/blurb ....
MYSTERY WAS THE ONLY THING THEY HAD IN COMMON. BUT THAT WAS MORE THAN ENOUGH ...
Sharon McCone had come home again: to her warm, troubled family, to San Diego and a convention of private detectives in a posh seaside hotel. For Sharon it was a chance to catch up with old friends. All except for the one who fell four stories from one of the hotel spires.
Now Sharon is determined to find out why her friend, the director of security at the Casa del Rey Hotel, died. To do it she recruits a slouching fellow she affectionately calls "Wolf." Wolf - otherwise known as the Nameless Detective - has uncovered a little mystery of his own at the Casa del Rey. Now the two cases, like the two sleuths, are bonding beautifully - within a knot of kinky sex and multiple murder that will take twice the cunning to unravel, and twice the luck to survive ...
A few years ago I embarked on an ambitious plan to read my way through Bill Pronzini's Nameless mysteries at a rate of one a month. Despite enjoying the first dozen or so and keeping with the programme for more than a year I got waylaid. Double is the 13th in the series and one which is co-written with his wife, though I don't think she was at the time of the book's conception. Marcia Muller is the author of the Sharon McCone PI series and here the two author's two detectives collaborate.
If I'm totally honest I was a bit bored by the book until the second half when things start to move at a slightly quicker pace. McCone and Nameless - though here he is referred to as Wolf for large parts of the book - meet up at a PI convention. A woman flies out of a fourth story window and Nameless witnesses it from a distance. The dead woman is a friend of McCone's who had been intending to talk to her about something. McCone isn't convinced it is suicide and decides to do some digging. In the meantime Nameless is a bit puzzled by the fact that a woman and child he was talking to before the incident have disappeared from the hotel and the management have denied they were ever present at the location. He wants a few answers of his own.
Nameless and McCone both do their thing separately initially and as the book progresses more in cooperation with each other, though still on a mainly comparing notes basis. The investigations - with further incidents including death, danger, zoo animals, an ex-military man with political ambitions, a dead private detective, a sex club, a blackmailer, a kidnapper and a trip to Mexico - eventually merge and answers are provided to our initial events.
On reflection I think the book ended up being a bit better than I thought it would. The first half was a bit draggy, with initial incident aside not too much happening at all. Mainly scene setting and a bit of character background for both detectives.

The last hundred pages or so were a lot busier and in truth all the plot strands were skilfully connected and by the conclusion every question was answered. There's also a bit of humour with McCone's mother trying to matchmake the two protagonists, despite the essence of their relationship being a sort of father - daughter one.
Overall 3 from 5

I think reading this one has given me an excuse to get back to the Nameless series and try and finish what I started. (Only maybe 30 to go.) I do have a Marcia Muller - Sharon McCone novel on the pile,
but I'm not minded to dig it out anytime soon.
Booktaker, Nightshades, Quicksilver, Casefile, Bindlestiff, Dragonfire, Scattershot, Hoodwink, Labyrinth, Twospot, Blowback, Undercurrent, The Vanished and The Snatch are my previous encounters with Nameless - 12 novels, one long short story and a collection of short stories.