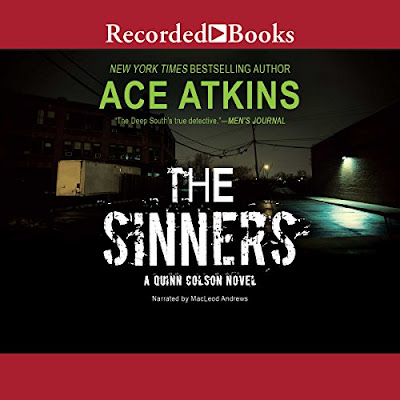 Synopsis/blurb ....
In the new novel from New York Times - bestselling crime master Ace Atkins, violence comes in many forms...and this time it may be more than Quinn Colson can handle. The Pritchards had never been worth a damn--an evil, greedy family who made their living dealing drugs and committing mayhem. Years ago, Colson's late uncle had put the clan's patriarch in prison, but now he's getting out, with revenge, power, and family business on his mind. To make matters worse, a shady trucking firm with possible ties to the Gulf Coast syndicate has moved into Tibbehah, and they have their own methods of intimidation. With his longtime deputy Lillie Virgil now working up in Memphis, Quinn Colson finds himself having to fall back on some brand-new deputies to help him out, but with Old West-style violence breaking out, and his own wedding on the horizon, this is without doubt Colson's most trying times as sheriff. Cracks are opening up all over the county, and shadowy figures are crawling out through them--and they're all heading directly for him.
My second time around with Ace Atkins and one which I enjoyed a bit more than the previous encounter, The Fallen. It's another series book with Quinn Colson, but - and I don't know if it's typical for the series or not - I felt Colson didn't feature that much to be honest. When he did it was usually to discuss his forthcoming wedding nuptials, and the catering arrangements, guest list and entertainment.
The novel mainly focuses on rival criminal elements and their competing enterprises, mainly the growing and/or sale of drugs, shipping illegals and other stolen items and for one entity running a brothel as well, and for another a legitimate sideline racing cars.
This rivalry saw us spend a lot of time in the company of some petrol heads and their maverick, ex-con uncle; a brothel madam; a biker gang; a bit of time with a black undertaker with a fleet of drug carrying hearses; some Dixie Mafia heavies and a one-armed mate of Quinn's who unwisely has got caught up with a dodgy trucking company and is now informing for another law enforcement agency.
There's a fair bit of conflict, scheming, posturing, peacocking, tough talking, trash talking, violence, death, dismemberment, hold-ups, and confrontation with shifting alliances, double dealing and one-upmanship. As I like spending more time in the company of criminals (I find them more interesting) than law-abiding types, I had a great time.
Quinn Colson does get involved to a degree and has interactions with some of the above, but was mainly on the periphery. There is some backstory relating to his uncle, his predecessor as sheriff, who had history with Heath Pritchard, the ex-con. Pritchard, foul-mouthed and positively Neanderthal in attitudes and outlook was probably the most entertaining character in the book.