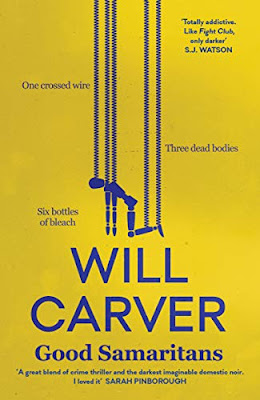 Longlisted for the Guardian’s Not the Booker Prize

THRILLER OF THE YEAR in GUARDIAN, TELEGRAPH AND DAILY EXPRESS

‘I loved this book. Dark and at times almost comical, a great blend of crime thriller and the darkest imaginable domestic noir’ Sarah Pinborough

Dark, deviant and disturbing domestic noir … one of the most entrancing, sophisticated and page-turning psychological thrillers of the year…

Seth Beauman can’t sleep. He stays up late, calling strangers from his phonebook, hoping to make a connection, while his wife, Maeve, sleeps upstairs. A crossed wire finds a suicidal Hadley Serf on the phone to Seth, thinking she is talking to The Samaritans.

And someone is watching…

Dark, sexy, dangerous and wildly readable, Good Samaritans marks the scorching return of one of crime fiction’s most exceptional voices.

My first time reading this author and after being mildly entertained, nothing more very probably my last. I had hoped for somewhat more.

The book revolves around three main characters, two of them married to each other and one who connects with the husband, after witnessing him doing something he really shouldn't. Despite the book being tagged as the 1st in the Detective Sergeant Pace Series, Pace himself would be the fourth player in our drama, but he only has a minor role.

Events initially I kind of found confusing, as to who was doing what and why, but they soon settled down and became apparent. The thing was I couldn't really see any justification or motivation for the behaviour and actions of the main players.

Character #1. Yeah, you hate your job, you despise your wife, you can't sleep, you're frustrated, you want something more...... ergo change your life then, why change others irrevocably?

Character #2. You want your husband to pay attention, you portray as a strong women, but you act as his enabler, you support his predilections, until such time as you don't. Why?

Character #3. Yes you're a sad sack loner with OCD and there's something terrible which happened to someone you cared about in the past. Boo-fucking-hoo. Get over it, you muppet.

Character #4, Mr Policeman, well I'd like to have known you better but hey sayonara and all that, it just wasn't meant to be.

Reasonable pace, twisty-turny-twisty story with a predictable final twisty bit which twirls and pirouettes before finally twisting at the end. A bit boring I suppose.

I think I'm obviously out of step with the vast majority of readers. Over 100 reviews on Amazon and 84% loved this. I'm the odd man in seven who was underwhelmed. Each to their own. And in truth I've read worse.