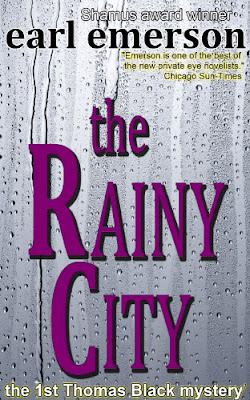 "Earl Emerson is one of the best of the new private eye writers."
-Chicago Sun-Times

Something made Melissa Nadisky flee her husband and their daughter. The note she left behind paints a picture of a woman haunted by a private hell. Now Thomas Black's friend, Kathy Birchfield, wants him to find Melissa-before she's consumed by her secret, terrifying demons.

Yet the straightforward missing persons case turns deadly when a killer starts silencing key witnesses in Black's investigation. But there's no turning back-especially after the sometimes-psychic Kathy tells him about her terrifying vision: a weeping little girl and a pit full of human bones. . . .

"Emerson is right up there with the best in the genre when it comes to bringing the elements of mystery to a rolling boil." - Mostly Murder

An author I thought I had never heard of, before a recent conversation over on Twitter had me looking him and his books up, only to find I had bought this one back in 2014.

It's the first in a PI series featuring Thomas Black and it was nominated for a Shamus Award back in the day. There's upwards of a dozen Black novels in total.

Kind of a typical PI case...... the search for a missing women with a dysfunctional family, featuring a docile husband with the spine of a jellyfish and an all-powerful, controlling father.

We witness ..... mental fragility, abuse, control, domination, a lack of self-worth, drug use as a means of coping and as a means to be kept in line, family secrets, spousal complicity, custody issues, infidelity, murder - past and present, repressed memories and a lot more.

Black has a strong friendship with his flatmate, Kathy which you kind of wonder if it might develop into anything more in future books. There's a bit of comedy gold to be had when she insists on bursting in on him when he's bathing. For now they have each other's backs. During the course of the book, Kathy is useful to Black, assisting him in his investigation. Only fair really as it's her friend he's looking for.

We do also get a bit of PI on PI violence, as Thomas receives threats and suffers intimidation because of his efforts to locate the missing woman. Another man in the same game is sicced on him, keeping tabs on who Black is speaking to and what he is uncovering. I quite liked the rise in tension as Black tries to deal with being targeted.

Overall there's quite a grim and gritty investigation, one I enjoyed without feeling I was reading anything earth-shakingly new. I like 80s books - a time I can recall living through, with a pre-tech world..... no mobile phones, no internet, no instant Google answers and a bit of old school detective work.

I look forward to reading more from the author and this series without feeling compelled to do so immediately.