Six more into the collection..... 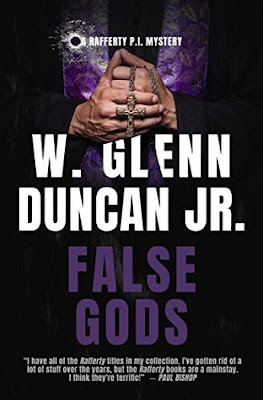 Seventh in the Rafferty PI series. The first six were penned by W. Glenn Duncan, who sadly passed in 2018. The series has been continued by his son. I do like a PI series.

Teenager Kimberly has run away from home.

Rafferty can do this one with his eyes closed; he’ll have her back by dinner-time.

It’s obvious she’s run away with her boyfriend, though her mom doesn’t want to admit it. All cases should be this easy; Rafferty’ll have it wrapped up by the weekend.

But when Rafferty finds the boyfriend home alone, that idea bears rethinking.

The last sight of Kimberly was of her putting the missionary into the position with charismatic cult leader, Dariell Thof and no-one knows where she’s gone since.

By the time Rafferty tracks Kimberly to a remote compound in the Texas desert, he’s stuck between a pack of gun-toting religious zealots and an ATF agent playing hardball.

Can Rafferty get Kimberly out before the two sides come together and all hell breaks loose?

An author I've heard of but never tried before. Sadly, she died a couple of years ago.

"There are only a handful of authors in the world who can craft true suspense, and Billie Sue Mosiman is one of the best." C. Terry Cline, Jr., author of REAPER

The killer in the night.
He waited in the shadows, a dark and deadly presence. He was no novice at this terrible trade--he had struck before and he would strike again. And with each new killing he became less human...and more vicious.
He stood patiently, a wire garrote in his strong hands, ready to claim yet another victim. Soon he would have one more to add to his growing list unless they could stop him. But how could they when they didn't know who he was? What he was? To a terrified city he was known only as the Wireman.

Loosely based on true crimes which occurred in Houston, Texas in 1978-80.


A Billy bargain - reduced to a couple of quid, some very positive reviews and another speculative purchase.I like reading about crims.

Sometimes in life the direction you choose could come down to making a choice that at the time didn’t seem like a big deal, only looking back you knew it wasn’t smart. Had his conversation gone differently with his father in the spring of 1985, Patrick may never had become a criminal. While shooting hoops with his old man that breezy afternoon in April, they struck up a conversation. Patrick had been kicked out of Walt Whitman High School a few months earlier, but had been working full-time ever since. He was working hard at the time and would have kept at it. But his dad’s rejection, and the way he did it, burned Patrick badly.

Patrick doesn’t blame his dad for becoming a criminal, but that was the final straw. Somehow, he was determined to find a way to get that Mustang GT his dad wouldn’t cosign for him. Selling cocaine would help him to achieve that. That’s when he began hustling.

It may feel like a quick high. You may think just one more big sale and you can get out. But you’ll learn that the life of drugs and crime doesn’t pay.

Michael P. Dineen grew up in Huntington, Long Island, New York. He studied and taught karate for over 20 years. He was a trainer to professional athletes.

After high school, Dineen pursued a life of crime for more than 20 years and survived to tell this story, his story.

Years ago I was big on Vietnam War memoirs and accounts as well as enjoying some fiction relating to the period. I'll be interested to see if this one re-piques my fascination for this tragic conflict.

On an isolated hill near the Cambodia border, three hundred men are working non-stop to construct a special forces camp.

US Captain Mack Gerber and his ‘A-team’ Scorpion Squad are put in charge.

With help from the local Tai tribesmen the Americans are on a mission to establish a stronghold in an area long ruled by the Viet Cong.

Gerber is in a race against the clock to fortify the camp before the VC begin their attack.

But faced with the incompetence of his general and disobedience in the ranks, it looks like he could be destined to fail.

BODY COUNT is an action-packed, authentic military historical thriller following an American battalion as they fight to survive during the brutal Vietnam War. It is the first book in The Scorpion Squad series,


When a body is found in a remote Scottish glen, DI Munro comes out of retirement to investigate

The Police chief wants everything wrapped up before the upcoming regatta, but the locals are remarkably unforthcoming with helpful information.

Sassy and quick, London detective sergeant Charlotte West is roped in by DI Munro to help solve what is now a murder case.

It is good police work that will unravel the truth behind the crime, but not without ruffling a few feathers first.

Will the killer escape the sharp-witted detectives’ grasp?

If you enjoy a whodunnit with a twist, this atmospheric novel is for you

Set in the coastal town of Inverkip in the north-west of Scotland, AVARICE is a straightforward murder mystery with more twists and turns than Spaghetti Junction.

No blood, no gore, no serial killers! But it's a cracker.

AVARICE is the second book by Pete Brassett to feature DI Munro and DS West, the detectives that first appeared in SHE. It's not a sequel and can be read as a standalone. However, those who have read SHE will have a head start on the characters' profiles.


I've previously enjoyed The Breaking of Liam Glass by Charles Harris, so I'm looking forward to this one.


If you enter THERE IS NO TURNING BACK
Ross Blackleigh is on trial for four crimes which he insists he didn’t commit. A detective inspector and a thoughtful self-reflective man, he goes against his counsel’s advice and takes the stand in court.
This is his story.
Ross found himself wandering the streets one night, bleeding from the head and unable to remember the past year and a half. But before he could make sense of it, he was summoned to a crime scene where a nurse had been brutally murdered.
His amnesia unnerved him and, fearing the worst, Ross allowed himself to be taken to hospital, only to be viciously attacked by a stranger with a knife.
Suspecting that the attack was connected with the nurse's murder and that his own police colleagues were behind it, Ross set out on two parallel investigations: one into the killing and the other into his own mind.
But when he digs into his own psyche, he is scared by what he finds…
Is Ross being set up or is something far more disturbing behind the killings?
Posted by col2910 at 02:16