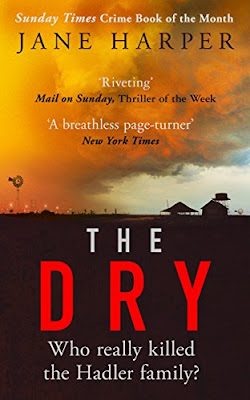 WHO REALLY KILLED THE HADLER FAMILY?

Amid the worst drought to ravage Australia in a century, it hasn't rained in small country town Kiewarra for two years. Tensions in the community become unbearable when three members of the Hadler family are brutally murdered. Everyone thinks Luke Hadler, who committed suicide after slaughtering his wife and six-year-old son, is guilty.

Policeman Aaron Falk returns to the town of his youth for the funeral of his childhood best friend, and is unwillingly drawn into the investigation. As questions mount and suspicion spreads through the town, Falk is forced to confront the community that rejected him twenty years earlier. Because Falk and Luke Hadler shared a secret, one which Luke's death threatens to unearth. And as Falk probes deeper into the killings, secrets from his past and why he left home bubble to the surface as he questions the truth of his friend's crime.

Praise for The Dry

A couple of mysteries for the price of one here in this much hyped best seller from Jane Harper.

We have the bizarre murder/suicide of Luke Hadler and his family. Hadler's friend, cop Aaron Falk returning to town for the funeral, and at the request of his dead friend's parents looks into events outside of his jurisdiction. With this return to his childhood home, we also re-visit events of his past which saw the death of a childhood friend and resulted in the departure in haste of Falk and his father, pretty much chased out of town under an angry cloud of suspicion and resentment.

I really enjoyed this one..... great setting - small town, rural Australia suffering the worst the elements can throw it, an unrelenting drought and as a consequence all-round economic hardship, frayed tempers and some short fuses. Small towns can very often mean small minds, long memories, resentments, secrets, and cliques with the bully voices overwhelming the more moderate and timid.

Great characters - Falk himself, solitary with few, scrub that no emotional ties in his life; a couple of sympathetic allies - Raco, the newish cop in town, who works with Falk to pick apart recent tragic events and the local pub owner and Falk's landlord; the head of school - another outsider; the childhood friend and the much aggrieved family of the long deceased girl from Falk's earlier life in Kiewarra.

Perfect pace - exciting when called for, thoughtful and unhurried in other places; a compelling investigation, with a decent flip-flopping of timelines back to Aaron's youth and current day events. I liked the slow drip drip of answers and the eventual uncovering of the facts. I did kind of think it was a bit of a cheat towards the end of the book, where the readers find answers to what happened in the past, but I'm not sure the main characters do. Maybe I'm misremembering.

Overall, a great book which I was sucked into and didn't want to put down. On this occasion I'm inclined to believe the hype.

I've read the second Aaron Falk before, a year or two ago - Force of Nature - and I have Harper's 3rd book The Lost Man sat on the pile. Jane Harper is fast turning into a firm contemporary favourite.