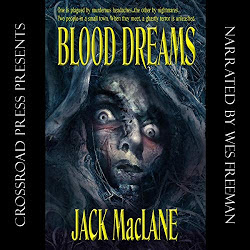 Hubert is a killer. He loves the sport of it - the thrill of the hunt - and Hubert can feel and share in the pain of his victims as they breathe their final breath.

Larry is a young boy who dreams about death before it happens. He can't remember his dreams by day, but by night he is haunted by the faces and words of the dying. When the two end up in the same town, and become aware of one another, a classic battle of good and evil ensues. Blood Dreams is an old school supernatural thriller that will keep you on the edge of your seat.

Another book enjoyed on Audible over a couple of days and one with crimes in it; i.e. murders though with a supernatural twist to it. I've seen it classified as horror, but I wouldn't necessarily agree with that. Horror fiction I kind of expect to be, if not necessarily scared at the very least made to feel uncomfortable and I didn't get that vibe here. Supernatural thriller sounds about right.

Small town setting, a bereaved family with a young boy and his mother relocating, a bookseller with a cruel streak and a semi-normal front, an elderly loner and a new cop in town, dreams and nightmares - a precursor to death, a certain inevitability about confrontation, conflict and a settling of matters.

I liked the characters and their stories, their histories and the paths that got them to where they were now. I liked the new connections and friendships that came from the arrival of Larry and his mum in the town. I was probably less enamoured by the supernatural bits...... the connectivity between the good Larry and the evil Hubert, the conversations Hubert had with his first human victim etc etc. I didn't necessarily dislike these bits as they were important to the story the author was telling, just they didn't really grab me. I would probably have enjoyed it more if the author had found a way of pitching the protagonists into combat through a more normal manner. 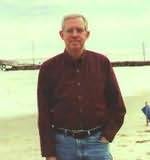 Jack Maclane was a pseudonym of the late Bill Crider. Bill Crider's work has been enjoyed before - Piano Man and Outrage at Blanco