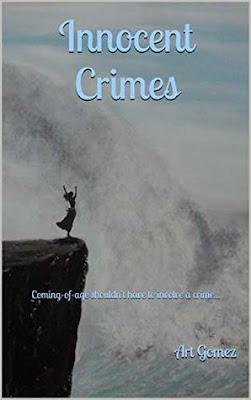 Coming-of-age shouldn't have to involve a crime...

You may ask, is there such a thing as an innocent crime? Not on the streets of Hollywood. Particularly in the case of an alcoholic father who is arrested for a felony he can’t remember committing—even though all DNA evidence shows he’s guilty!

As you dive into these pages, you’ll discover how a naive nineteen-year-old manages to develop the street smarts to help gain her father’s liberty; but not without the cost of losing her well-being...

First read of the new year and a bit of a disappointment if I'm truthful.

Bruce, an alcoholic single parent of Carey, gets arrested for the murder of a prostitute he can't remember meeting. The evidence as such points at him committing the crime. Carey, the daughter refuses to believe he's capable. Pete, her boyfriend is a rookie cop and is torn between his responsibilities to the badge and his love and loyalty to Carey, despite his belief that Bruce did the deed.

Following and in a nutshell, we have Carey's obvious concern for her father's predicament and declining health, combined with her somewhat naive efforts to prove him innocent of the crime he's currently being held in jail for. Her efforts set her at odds with Pete and causes fractures in their relationship.

At the conclusion, we get an answer to the question over Bruce's innocence or guilt and also we establish where the couple's relationship is at.

On the plus side, the book was a quick read, and the pages turned quickly and I didn't ever feel like quitting or throwing it at the wall.

That said, I wasn't especially convinced by the plot which had several weaknesses in my opinion. Would Pete jeopardise his dream job for love? Would an intelligent woman, comprise such a madcap scheme to try and deflect from her father's possible guilt and use her boyfriend into the bargain, unconcerned by the consequences of her actions? Unlikely. I just wasn't convinced by any of it.

Similarly the dynamics in the relationships. Carey's lover for her father and boyfriend; Bruce's animosity toward Pete; Pete's concern for Carey and the tensions in their relationship as the story unfolded ...... I just never felt that the characters were real people, as opposed to cardboard cut-outs. There seemed to be no real depth to them and the emotions that the author was endeavouring to portray never connected to me and made me feel like I cared or had an investment in the outcome.

The author introduces a twist or two before the outcome is revealed. Other characters are introduced. We get some involvement in Carey's day job and see her colleagues. We meet Pete's friends on the job and spend a bit of time in their company, and it does help to add a bit of flesh to the bones of the story. I quite two of the minor characters in the book - the female detective on the case and Sonny, Carey's neighbour-cum-annoying sidekick. Sonny gets more of a look-in with the action, than Newman does which was a shame as she had a bit of zing and chutzpah about her. I found them better company than the main players.


Reasonable setting  - LA, followed by a trip down Mexico way for our climax.

Overall verdict not great, but I've read a lot worse.