A couple from Jonathan Moore, another author I have yet to read, but one which was recommended to me by author Dave Putnam. 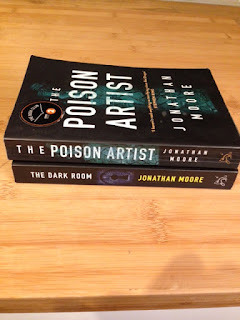 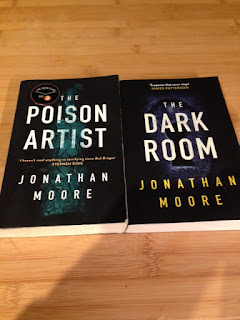 Moore has had six novels published since 2013, all of them stand-alone books. Fantastic Fiction labels him as an author of dark thrillers in the mystery and horror genres. 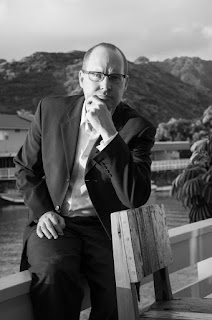 I think I would probably have passed these by if they hadn't been recommended to me, because the covers don't especially inspire me to pick the books up. Not exactly eye-catching are they? 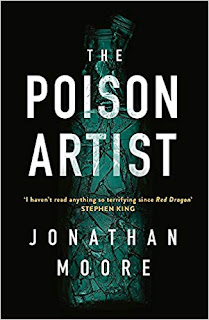 "An electrifying read . . . I haven't read anything so terrifying since Red Dragon." - Stephen King

Caleb Maddox is a San Francisco toxicologist studying the chemical effects of pain. He's out drinking after a bad breakup when a hauntingly seductive woman sits down at his side. He talks to Emmeline over absinthe, but their encounter is fleeting. She brushes her lips on his ear and disappears. He must find her. As Caleb scours the city, he begins helping the city's medical examiner with a serial-murder investigation. Soon the search for the killer entwines with Caleb's hunt for Emmeline, and the closer he gets to each, the more dangerous his world becomes. "A wicked mix of Poe, The Silence of the Lambs, and Vertigo,"* The Poison Artist spins a thrilling tale of obsession, damage, a man unmoored by an unspeakable past, and a woman who offers the ultimate escape.

"A totally new take on the mystery-thriller genre . . . Fresh and unpredictable. The writing is top-notch . . . Grade: A." - Cleveland Plain Dealer 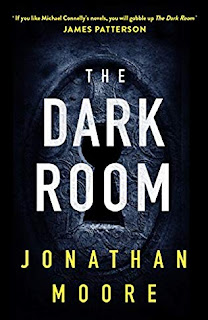 "If you like Michael Connelly's novels, you will gobble up Jonathan Moore's The Dark Room."
- James Patterson

Gavin Cain, an SFPD homicide inspector, is at an exhumation when his phone rings. The mayor is being blackmailed and has ordered Cain back to the city; a helicopter is on its way. The casket, and Cain's cold-case investigation, must wait.

At City Hall, the mayor shows Cain four photographs he's received: the first, an unforgettable blonde; the second, pills and handcuffs on a nightstand; the third, the woman drinking from a flask; and last, the woman naked, unconscious, and shackled to a bed. The accompanying letter is straightforward: worse revelations will come unless the mayor takes his own life first.

An "electrifying noir thriller,"* The Dark Room tracks Cain as he hunts for the blackmailer, pitching him into the web of destruction and devotion the mayor casts in his shadow.

"With an Edgar Allan Poe feel to it, this book leaves an uncomfortable, indelible impression . . . San Francisco has never been so menacing." - Kirkus, starred review