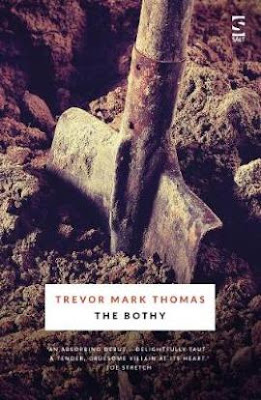 Tom is grieving for his girlfriend. Her powerful family, convinced he is responsible for her death, place a bounty on his head. On the run, Tom seeks refuge in the Bothy, a dilapidated moorland pub run by ageing gangster Frank. Tom tries to keep the bounty a secret, but news travels fast, even in the middle of nowhere.

Trevor Mark Thomas’s first novel is a tense, violent drama involving desperate characters with little to lose apart from their lives. Amid moments of black humour and rare tenderness, buried fears and rivalries rise to the surface, creating an atmosphere of claustrophobia that builds to almost unbearable levels.

A tension filled read as our main character Tom is given refuge by Frank, the head of a small criminal gang of misfits at his isolated pub on the Yorkshire Moors. Tom is in danger after the death of his girlfriend. Her family hold him culpable and with a bit of Old Testament logic applied, it's an eye for an eye.....

His appearance in the pub is not exactly welcomed and he meets hostility from the rest of Frank's team. They don't know who he is, or why he's there. It's a sanctuary, far from anywhere, a run down pub without any customers and one which serves Frank's purposes. His income is derived from criminal activity, but we're never quite sure what he's involved in. Fair to say, Frank has his own issues to sort out without Tom's presence clouding his agenda. A dispute has arisen with some contacts and part of the solution involves shovels and a lot of digging. Tom's eyes are fully opened to his difficult situation - a case of out of the frying pan, straight into the fire.

Within Frank's team there is tension and the stirrings of rebellion. His decisions are starting to be questioned in whispers. Loyalty is getting tested and Tom's presence fully tests the cohesion of his gang. When the real reason for his arrival is discovered, a betrayal seems inevitable.

Tom's only normal interactions are with Frank's much younger girlfriend, Cora - an initially innocent relationship, but one which in the skewed environment they find themselves in is open to misinterpretation and which may see Tom at loggerheads with Frank.

Frank's dispute grows legs and once the cat's out of the bag as far as the price on Tom's head is concerned, violence and bloody confrontation is inevitable.

There's a pervading sense of rot and decay which oozes from the pages and seeped into my pores as I read this one. A fantastic sense of place, one that left me in need of a cleansing shower after each session reading the book.

Tom is a sympathetic character, one driven low by events which have now escalated and spiralled totally out of control. He's not quite without hope but his resolve is severely tested. Reading to the end, I was anxious to see what final hand fate dealt him. 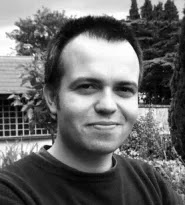 Setting, character, mood, plot, narrative and outcome - all ticks in the box.

The Bothy is Trevor Mark Thomas's debut novel - something I find hard to believe. It's very good.