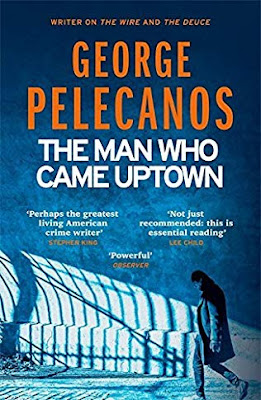 In best-selling and Emmy-nominated writer George Pelecanos' "Taut and suspenseful" new novel, an ex-offender must choose between the man who got him out and the woman who showed him another path. (Booklist, starred review)

Michael Hudson spends the long days in prison devouring books given to him by the prison's librarian, a young woman named Anna who develops a soft spot for her best student. Anna keeps passing Michael books until one day he disappears, suddenly released after a private detective manipulated a witness in Michael's trial.

Outside, Michael encounters a Washington, DC, that has changed a lot during his time locked up. Once-shady storefronts are now trendy beer gardens and flower shops. But what hasn't changed is the hard choice between the temptation of crime and doing what's right. Trying to balance his new job, his love of reading, and the debt he owes to the man who got him released, Michael struggles to figure out his place in this new world before he loses control.

Smart and fast-paced, The Man Who Came Uptown brings Washington, DC, to life in a high-stakes story of tough choices.

The Man Who Came Uptown is the 21st book from George Pelecanos and according to my Goodreads stats the 18th that I have enjoyed, and my first since March, 2012.

From what I recall from a lot of his earlier books, the latest lacks the complexities of some of his earlier work. There's not as much criss-crossing of characters and varying timelines, which previously had me marvelling at his story telling prowess. That said this was a quick read and I enjoyed it.

Our main man is Michael Hudson and we are concerned with his efforts to go straight after a surprising release from prison. The release has been engineered by a PI, Phil Ornazian after some witness tampering. The release comes at a price. Michael will be the wheelman for Ornazian and his ex-cop partner when they carry out their next shakedown of a Washington pimp, though Hudson doesn't know this. Drive or maybe the witness suddenly remembers Michael's part in a robbery. Hobson's choice pretty much.

In his life outside prison, Michael is endeavouring to reform and go straight. He has a steady job as a dishwasher and the respect of his boss and his peers. He's reliable and already making plans for his next step. He has a determination not to let his mother and siblings down again and continues to enjoy his reading. Reading being his new found passion, a discovery made in prison and all thanks to the librarian, Anna. That they cross paths in DC is inevitable and with a flicker of attraction between the pair an added complication neither of them need given her married status. Ornazian knocking on his door is an obstacle to his plans.

Anna enjoys her job, connecting with the prisoners in a positive fashion through the book club she has instigated. She's relatively content with her lot in life, but not totally on the same page aspirationally as her husband. There's an emotional connection with Michael through their shared love of books, and an attraction acknowledged by both but not acted upon.

Pelecanos also uses this story thread to provide a hat-tip at various authors and books and also to emphasise the power and benefits of reading. Elmore Leonard, John D. MacDonald, Don Carpenter and Willy Vlautin are among the familiar names dropped. There's a certain irony in the pimping of Capernter's Hard Rain Falling, as my shelved copy includes an introduction by none other than Pelecanos himself. Willy Vlautin's Northline is the other book given the hard sell.

After impressing with his driving skills on the first job, unsurprisingly Michael is press-ganged into another by Ornazian. During the course of the book we spend some time with Ornazian and get to know him and see his love for his family, and like he does, we wonder where he took a wrong turn and crossed the line into his dangerous sideline. He feels guilt at forcing Michael to participate in criminality, but not enough to desist from using him.

Great setting, interesting characters, lots of action and a fair bit of violence as our strong arm robberies go down. I enjoyed the tension which Pelecanos created throughout and was keen to discover whether Hudson escaped with his freedom intact.

I'm looking forward to enjoying the other three remaining books in his canon that I haven't got to yet - The Martini Shot, The Double and What it Was.