Make hay while the sun shines, which is what I did in December - the intention being to start reading some of the books I own in 2019 and stop buying more. (I'll see how that goes!)

Here's six more that were acquired in December...... 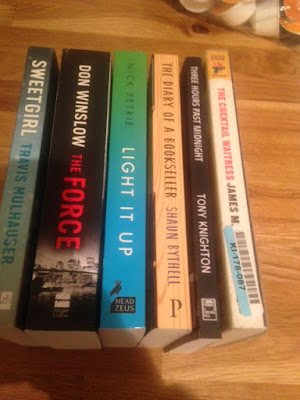 I can't actually remember what was the last Winslow novel I read, but it's been a few years now. Maybe I can address that oversight in 2019?

The acclaimed, award-winning, bestselling author of The Cartel - voted one of the Best Books of the Year by more than sixty publications, including the New York Times - makes his William Morrow debut with a cinematic epic as explosive, powerful, and unforgettable as Mystic River and The Wire.

Our ends know our beginnings, but the reverse isn't true . . .

All Denny Malone wants is to be a good cop.

He is "the King of Manhattan North," a, highly decorated NYPD detective sergeant and the real leader of "Da Force." Malone and his crew are the smartest, the toughest, the quickest, the bravest, and the baddest, an elite special unit given unrestricted authority to wage war on gangs, drugs and guns. Every day and every night for the eighteen years he's spent on the Job, Malone has served on the front lines, witnessing the hurt, the dead, the victims, the perps. He's done whatever it takes to serve and protect in a city built by ambition and corruption, where no one is clean - including Malone himself.

What only a few know is that Denny Malone is dirty: he and his partners have stolen millions of dollars in drugs and cash in the wake of the biggest heroin bust in the city's history. Now Malone is caught in a trap and being squeezed by the Feds, and he must walk the thin line between betraying his brothers and partners, the Job, his family, and the woman he loves, trying to survive, body and soul, while the city teeters on the brink of a racial conflagration that could destroy them all.

Based on years of research inside the NYPD, this is the great cop novel of our time and a book only Don Winslow could write: a haunting and heartbreaking story of greed and violence, inequality and race, crime and injustice, retribution and redemption that reveals the seemingly insurmountable tensions between the police and the diverse citizens they serve. A searing portrait of a city and a courageous, heroic, and deeply flawed man who stands at the edge of its abyss, The Force is a masterpiece of urban living full of shocking and surprising twists, leavened by flashes of dark humor, a morally complex and utterly riveting dissection of modern American society and the controversial issues confronting and dividing us today.

A bit of non-fiction which I picked up when browsing after Christmas. I'm an inveterate book buyer, time to see things from the other side of the fence.....

Love, Nina meets Black Books: a wry and hilarious account of life in Scotland's biggest second-hand bookshop and the band of eccentrics and book-obsessives who work there

'The Diary Of A Bookseller is warm (unlike Bythell's freezing-cold shop) and funny, and deserves to become one of those bestsellers that irritate him so much.' (Mail on Sunday)

'Utterly compelling and Bythell has a Bennett-like eye for the amusing eccentricities of ordinary people ... I urge you to buy this book and please, even at the risk of being insulted or moaned at, buy it from a real live bookseller.' (Charlotte Heathcote Sunday Express)
Shaun Bythell owns The Bookshop, Wigtown - Scotland's largest second-hand bookshop. It contains 100,000 books, spread over a mile of shelving, with twisting corridors and roaring fires, and all set in a beautiful, rural town by the edge of the sea. A book-lover's paradise? Well, almost ...

In these wry and hilarious diaries, Shaun provides an inside look at the trials and tribulations of life in the book trade, from struggles with eccentric customers to wrangles with his own staff, who include the ski-suit-wearing, bin-foraging Nicky. He takes us with him on buying trips to old estates and auction houses, recommends books (both lost classics and new discoveries), introduces us to the thrill of the unexpected find, and evokes the rhythms and charms of small-town life, always with a sharp and sympathetic eye.

I got a copy of this a few years ago via Net Galley but never read it. It was less than half price in Waterstones' sale, so maybe having it under my nose will inspire me to read it. I do think I will enjoy it.

A tense cat-and-mouse game and a brilliantly realised story of hope in a seemingly hopeless place.

Percy is 16 and used to her mama disappointing her. But this time her mama's been gone for nine days, and she's been seen up at Shelton Potter's farmhouse. Which can only mean she's strung out on meth again, and who knows when she'll be back.

A blizzard rolls in, and Percy jumps in her pickup and sets off for the farmhouse. She finds Shelton and a woman passed out on the floor, sleeping off the latest binge. But no sign of her mama.

Percy heads upstairs and finds a neglected baby girl in urgent need of care and attention. Percy knows she has no choice. She has to take the baby and get her to a hospital as soon as she can.

But the blizzard shows no sign of stopping, and soon her pickup is snowed in. Now she's on foot, and before long two-bit criminal Shelton wakes up and heads out with four of his associates, on the hunt for whoever has taken the baby....

Taut, darkly humorous and told in Percy's unflinching voice, Sweetgirl is a moving exploration of courage and sacrifice that is horrifying, tender, and hopeful.

The third in Nick Petrie's Peter Ash series. I have the first on the shelf but haven't read it yet....

Peter Ash is wearing an armoured vest, has a pistol strapped to his leg, a semi-automatic rifle by his side, and a large stash of drugs money behind him. It's hot, the static is buzzing and he's trying not to think about what happened last week.

Ash is riding shotgun in a truck leased to Heavy Metal Protection, a security firm that protects cash-rich cannabis entrepreneurs from modern-day highwaymen. Just seven days ago, Heavy Metal lost an entire vehicle, crew and cargo, disappearing without a trace.

Armed robbery? Double homicide? Whatever, Ash is there to make sure it doesn't happen again. There's no doubt he has the skill set for the job: eight years of hard-won combat experience and a nervous system fused on high alert - a crippling liability in civilian life... but a survival trait in a combat zone.

Another of those Hard Case Crime novels with an entertaining cover. Seemingly a lost final novel from Cain published posthumously......

Following her husband's death in a suspicious car accident, beautiful young widow Joan Medford is forced to take a job serving drinks in a cocktail lounge to make ends meet and to have a chance of regaining custody of her young son. At the job she encounters two men who take an interest in her, a handsome young schemer who makes her blood race and a wealthy but unwell older man who rewards her for her attentions with a $50,000 tip and an unconventional offer of marriage... Includes a 4,000 word feature on the locating of this "lost" Cain novel, by Hard Case Crime editor, Charles Ardai


Another author I have yet to read anything from, though his other Crime Wave Press published book - Happy Hour: And Other Philadelphia Cruelties sits on the pile. I do like my heist novels.

His last job a disaster, a professional thief teams with an old partner eager for one last score – a safe in the home of a wealthy Philadelphia politician. But they are not the only ones set on the cash. His partner dead and the goods missing, he hunts for his money and the killer to find out that this may have been a job best left undone.
Posted by col2910 at 23:37