A couple from Andrew Vachss this week. 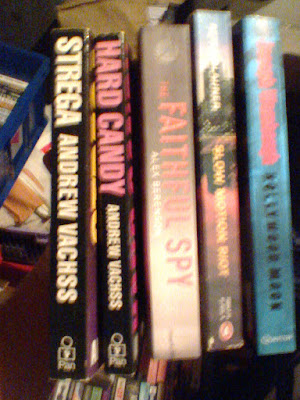 Vachss was an author I crossed paths with either late 80s or early 90s, I didn't keep reading records back then so who knows.

What I do remember is being blown away by this secretive, under the radar character Burke who with his network brought his own kind of justice to bear on child killers and abusers.

Vachss went on to write about 18 books in the Burke series, but I stopped trying to keep up after around 10 or 11. He's written half a dozen standalone novels and a couple of other shorter three book series - Cross and Aftershock.

In his work life ..... Andrew Vachss has been a federal investigator in sexually transmitted diseases, a social-services caseworker, a labor organizer, and has directed a maximum-security prison for "aggressive-violent" youth. Now a lawyer in private practice, he represents children and youth exclusively.

I've probably not picked up one of his books in about 10 years, but I'll try and get back to them later this year and see if they are still as compelling second time around.

Now a paid assassin, Burke is on a collision course with a man named Train, who runs a "safehouse" for kids. But when Burke learns that his suspicions about Train are right (the safehouse keeps kids in harm's way), he becomes his own gun-for-hire.
Posted by col2910 at 23:30