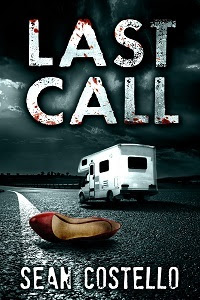 THIS BOOK is RATED-R FOR LANGUAGE by the publisher.

In the space of a single day, twenty-year-old Trish West purchases her first car, gets accepted into veterinary college, and finds her rockstar father, Jim Gamble, a man who vanished into the streets before she was born and now clings to life in a Toronto intensive care unit.

Eager to establish a relationship with Mr. Gamble, Trish heads out from her Northern Ontario home that very day to stand at his bedside. But along the way, she crosses paths with a man who will upend her life and the lives of everyone she cares about.

Meet Bobcat, a savage serial killer christened The Dentist by the press, a deranged trophy hunter who sees Trish as the ultimate prize.

Last Call is a story of lost innocence, sociopathic obsession, and moral redemption that is certain to haunt you long after you've read the last page.

My second outing in the hands of Sean Costello after reading his book, Squall a year or two ago. Last Call has a few more elements which push the boundaries of the book towards borderline horror, as we have some fairly graphic depictions of what our serial killer Bobcat does to his victims.

At the heart of Last Call is the story of a young woman trying to connect with her father, a man she can't remember ever meeting and one who if her mother has her own way never will. Jim Gamble left Trish's mother, Sally and followed the rock and roll lifestyle. Twenty years later, he's a homeless addict with nothing to live for. A chance encounter with our bogeyman, Bobcat, one which leaves him fighting for his life may with hindsight be the best thing that ever happened to him.

Recovering from his injuries, Trish, tipped off by an old boyfriend, Dean who works at the hospital visits her father and so begins the painful process of building a meaningful relationship with the man, unknown to her mother. Over the coming months she supports her father as he addresses his addictions.

In the meantime we spend a bit of time with the Bobcat. The Bobcat is doing what he does best, snaring victims, usually young women and carrying out a bit of improvisational dental work so he can craft his unique hand-made jewellery to sell. Once he has their teeth, he's happy to let them rot in an underground prison.

Jim Gamble reaches the milestone of a year clean from his addictions with a small event planned to acknowledge his ongoing recovery. Trish en-route encounters the Bobcat. Unbeknown to her, she's the one who got away before. He isn't letting it happen again.

With the police pretty clueless, Gamble and Dean, now back in favour as the romance with Trish has rekindled, patrol the highways trying to find any clues as to where the Bobcat operates from, all the while Gamble's new found sobriety hanging by a fragile thread.

I really liked this one. I enjoyed the story of the girl finding her dad and helping him battle his demons. I was less enamoured by her secrecy and the levels of deceit she employed to keep her mum in the dark, but her motivations were convincing, just not the way to go in my opinion.

Our encounters with the Bobcat were interesting and overall I was happy to go where Costello wanted to take me. High literature, this isn't but enough here to amuse and entertain and keep me turning the pages. I'll happily read more from Sean Costello in the future.

Thoughts on Squall are here.

Read in October, 2017
Published - 2015
Page count - 266
Source - free copy from author after signing up to his newsletter
Format - Kindle