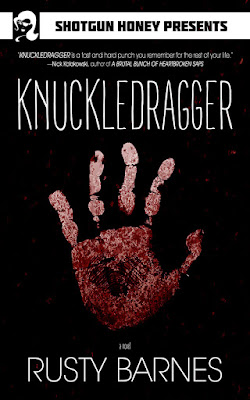 In Knuckledragger, hooligan and low-level criminal enforcer Jason “Candy” Stahl (“Irish” to his sometime girlfriend Rosario) has made a good life collecting money for his boss Otis, breaking the occasional leg or elbow, fucking Rosario, and living the life in Revere, MA. One collection trip, though, at the Diovisalvo Liquor Store, unravels events that turn Candy’s life into a horror-show.

In quick succession he moves up a notch in the organization, overseeing a chop shop, while he falls in lust with Otis’s girlfriend Nina, gets beaten for insubordination, and is forced to run when Otis finds out about Candy and Nina’s affair.

Events stretch as far as Houston, Texas, where Otis and Candy have a final showdown where everything is at stake. Loser gets nothing.

“Knuckledragger is fast and hard as a punch you remember for the rest of your life. The prose bursts with rough-hewn power, the pace is blistering, and the characters will break your heart. You couldn’t ask for a better slice of modern noir.” —Nick Kolakowski, author of A Brutal Bunch of Heartbroken Saps

Our tale concerns Candy. Candy is a collector for Otis. He's capable at his job; relatively untroubled by inflicting physical pain on those falling behind with their loan payments. There's no guilty conscience stopping him from sleeping at night. He has a regular squeeze, Rosie but's it's a relationship of convenience for them both. Nothing discussed, nothing official.

Candy's wandering eye gets him in trouble with the boss. Nina, Otis's girlfriend is trouble and a bit too much chat and a few too many glances, has Otis's crew dishing out a severe beating. Candy's smart but where Nina is concerned, his brains have relocated southwards of his trousers belt.

Broken bones and on the naughty list, Candy's taking some R and R with Rosie when a previous collection comes back to bite him on the bum. More testosterone and butting of heads ensues. Rosie's getting a feel for the kind of guy Candy is.

Hostilities over with Otis for now, a surprising promotion and his bones on the mend, Candy has a second opportunity to advance withing the ranks of his criminal fraternity.  But once bitten twice shy is not an adage our man intends to live his life by.

Candy fails to take on-board the previous warning. Otis unleashes his hounds and Candy and Rosie are running.

Despite the lack of many redeeming qualities I was rooting throughout for our main man, Candy. Maybe he was just less repellent than Otis, but probably we just spent more time in his company. It was interesting and obvious (to this reader at least) to observe his downward spiral. A bad choice made, consequences suffered. You kind of felt an inevitability about the outcome. Perhaps Candy himself, with a lack of any ambition in life or any real goals, knew his fate also.

Barnes kind of surprised me with Rosie's versatility and commitment to the cause.
I'm becoming a big fan of Rusty Barnes's work. 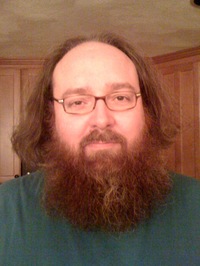 Ridgerunner was enjoyed previously - see here for a few thoughts.
Reckoning and Mostly Redneck sit on the pile. I'm looking forward to a future Ridgerunner sequel which is in the pipeline - either later this year or early-ish next.

In addition to the novels and short stories, Barnes has a couple of books of poetry which have been published - I Am not Ariel and On Broad Sound. He also runs the paying blogazine - Tough.