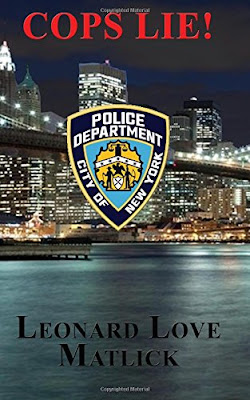 NYPD Officer Charles Griffin, a known drunk, a notorious bully, and dirty cop is involve in stealing drugs and money from drug dealers, is involved in an accident with an 18 wheeler that kills him, one other cop, and leaves 2 other cops critical.

Detective Tony Philadelphia, a homicide detective from the 9th precinct, is asked by the Precinct Captain to find out what happened. What happens next is a trail that goes thru dirty cops, brutal cops, using their badge to rob drug dealers, force sex, and get the Columbo Mafia family involved. In every page are descriptions of cop abuse, killings, and assorted cop dishonor that is fresh out of today's news stories.

A self-published book littered with typos and spelling mistakes and at times a wandering plot, definitely in need of a decent edit, but one which at the same time I really enjoyed.

The plot as such has a cadre of dirty cops and two far from squeaky clean ones (drinking and fornicating while on duty for starters) investigating them. Our main guy is Tony Philadelphia. Philadelphia is honest, treats street people with respect, doesn't use excessive force, loves women and has certain skills and unrivaled stamina that has the ladies loving him back. Philadelphia and his partner Ed Longo have to investigate after the death of a dirty cop in a road traffic accident.

The investigation uncovers a catalogue of crimes - stealing drugs from dealers and reselling them, carrying out mob hits and basically doing anything other than protect the public. It's an investigation which needs to be done with care - remember Serpico? There's the unwritten code of blue looking after blue, not ratting on a fellow cop.

Interspersed with the investigation, are numerous anecdotes regarding the police and how they act towards the street people they come into contact with. Young cops set targets by the hierarchy for arrests, stoppages, numbers of tickets issued, etc within a monthly period. Their behaviour towards the skels (NYPD slang for scumbags) as a consequence brutal - inflicting violence and planting drugs, false accusations of resisting arrest the standard excuse for the beatings handed out. After a while there's a certain monotony about these incidents recounted and witnessed by Philadelphia and his partner on their way to stakeouts or the local bar for free drinks.

The language used in the book is frequently crude and there's plenty of graphic sex scenes as Matlick endows his hero Tony Philadelphia with legendary bedroom skills. If you are easily offended this won't be a book for you. Fortunately I'm not and I found the dialogue and action amusing and entertaining. I do wonder if there's a slight exaggeration to the portrayal of so many cops as either on the take or abusive.

Another theme prevalent throughout the book is misogyny. The male cops on display, especially our hero are placed in a testosterone driven, Alpha-male environment where women are primarily viewed as receptacles for the male seed. All the sex is consensual and the women are all willing, a sort of cop-groupie type thing going on, but on the whole there appears little respect for them. In the light of recent harassment headlines in workplaces around the globe, mainly celebrity - Hollywood types and political - politicians in the UK, I wonder if it's an accurate portrayal of a modern police department. All women can't surely just be viewed as pussy and ass.

The plot kind of takes a slightly far-fetched turn with Philadelphia at the behest of his bosses, getting close to a Mafia widow in an effort to secure evidence against her extended family - all of whom are connected and participated in the death of the widow's husband and father. 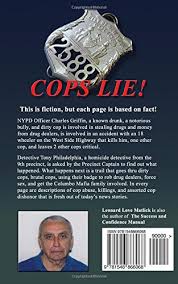 Another interesting point made was the cooperation or lack of it, between all the different enforcement agencies. Each somewhat unwilling to share information, in the hope of claiming the collar for themselves.

Best book ever? No.
Was I entertained? Yes
Did I ever wish I was reading a different book at the time? No
Would I read more from the author? Maybe

Enjoyable, funny, crude, at times violent and at times repetitive. Not sure Matlick will be hired as a PR rep for the NYPD.