QUESTIONS AND ANSWERS WITH CHRISTOPHER FARNSWORTH

Yesterday saw a few thoughts posted on Christopher Farnsworth's Hunt You Down posted on the blog, link - here. 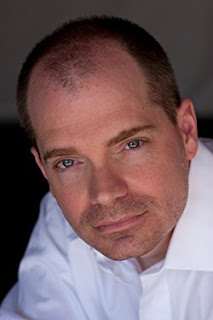 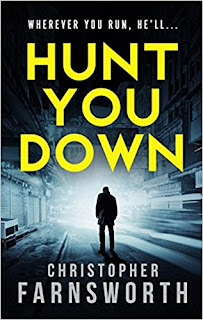 Today Chris is back answering a few questions..... 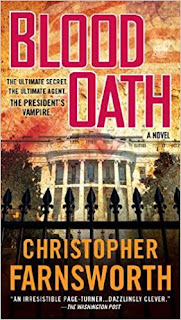 I’m lucky enough to write full time now. I was born and raised in Idaho, and worked as an investigative and business reporter before I sold a screenplay to MGM. After flinging myself at Hollywood for a while, I switched to writing novels when I published BLOOD OATH, about a vampire who works for the President of the United States. I’ve written five more novels since, as well as three novellas. I still write scripts and the occasional article, too.

I try to treat it like a regular job. I put myself in front of the computer after I get my daughters out the door for school, and I try to stay there all day. Some days are better than others, but I am a firm believer that you can’t wait for inspiration. As Jack London said, some days you have to hunt it down with a club.

I use the names of people I know for some of the characters in my work, and place names from when I was a kid. A friend recently emailed me because he recognized the name of a dive bar from our hometown. I love it when that happens. It makes me feel like people are paying attention.

I always know where a book starts and ends when I begin writing, but I don’t usually keep to a strict outline. And I don’t usually write linearly. I know the scenes I want to write, and then as I get close to the end, I see how they all fit together. It’s like a combination of a map and a jigsaw puzzle.

Now that I have children, it’s much harder for me to write — or even read about — violence against kids. I find it terrifying and disturbing in a way I could never comprehend before. I’ve still written a few scenes that involve threats against children, and each time, I’ve had to ask myself if I’m doing it because the story requires it, or because it’s such an easy way to raise the dramatic stakes. I used to look at some of my work like a video game or cartoon — I thought it was all just harmless explosions and noise. But given what’s going on in the real world, I’m trying to be more thoughtful about the actual cost of violence. I don’t know if I’m succeeding, but I’m trying. 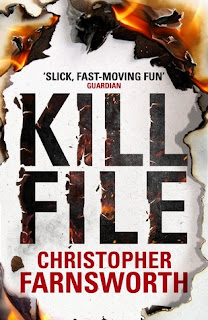 I’m intending to read Hunt You Down shortly, which I believe is the second John Smith book after Killfile, without any spoilers will we be seeing more of Smith in the future? Is he a character which has legs or are you onto pastures new?

I am at work on another book about John Smith. There are also a lot of stories left to tell in John’s world, which is sometimes uncomfortably close to our own. He’s one of the best — and only — people who can operate at his level, so he has insanely rich clients lined up for his services. But his clients also have incredibly wealthy enemies. He’s one man dealing with people who have the wealth of nations.

I’m also at work on another novel, a standalone, which I’m keeping secret for now.

How long from conception to completion did Hunt You Down take? Was it a smooth process or were there many bumps in the road along the way?

Fortunately, it went very quickly. I signed the contract for the book in January or February and delivered it at the end of August. John makes it easy.  He’s a lot of fun to write. Because of his unique gift, I get to write in what someone else called “first person omniscient.” He knows what almost every other character is thinking, so I can skip over to their perspectives as well. 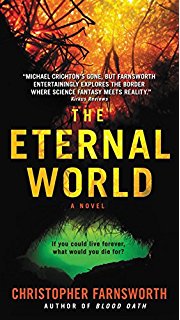 In addition to the John Smith books, I believe you also have a 5 book series featuring Nathaniel Cade as well as a standalone novel – The Eternal World. Can you tell us a bit about your other work?

The Cade books are about a vampire secret agent who works for the President of the United States. In Cade’s world, every dark horror story, every legendary monster out there is real — and Cade is the first response and last line of defense against them. He’s paired with a human handler, Zach Barrows, and together, they try to stop the nightmares from infecting the daylight world of the American dream. There are three Cade novels and two Cade novellas, starting with BLOOD OATH.

THE ETERNAL WORLD is a standalone novel I wrote based on an idea from movie producers Tom Jacobsen and Monnie Wills. It’s about a group of Spanish Conquistadors who discover the Fountain of Youth — and then slaughter the native tribe guarding it. They use the water to amass wealth and power over the centuries. But when they begin to run out of the water in the present day, they hire a young scientist to replicate it. However, they’ve been tracked over the centuries by the tribe’s sole survivor, a woman named Shako — who finally sees her chance for revenge. 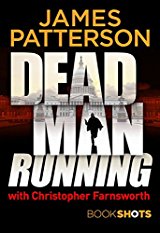 There’s also a collaborative effort with James Patterson – Dead Man Running, how did that come about?

As with so many things in my career, I got lucky. James Patterson’s editor, Trish Daly, is the former assistant of my editor at William Morrow, Rachel Kahan. She thought I’d be a good fit to work with him. It was actually very cool. I got to tell my mom I was writing a book with her favorite author. DEAD MAN RUNNING is about Dr. Randall Beck, an unorthodox psychiatrist with a brain tumor. He’s working against a ticking clock, which makes him fearless in many ways. And when one of his patients is gunned down in front of him, he’s drawn into a conspiracy that could lead all the way to the White House.

Is there one of your books, you are more proud of than the others? Which would you press into the hands of a new reader?

I will always have a soft spot for BLOOD OATH, because it was my first, but usually I give people a copy of KILLFILE and tell them to start there.

Not sure this counts as my writing career, but David Mamet pulled a coin from my ear after I gave him a copy of one of my novels. I was grinning about that for days.

Unpublished, yes. Gems, debatable. I wrote four novels before I was published for the first time. I have one about a team that rescues people from Hell that I always liked, but it remains in purgatory.

I’m working on the top-secret new novel and John Smith #3. I’m also working on a social interactive fiction game, a group of connected short stories based on a nightmare I had, and a new screenplay.

The feeling when it’s all flowing, and the words are coming one after another, and the typing seems effortless, and you look up, and you’ve written twenty pages without taking a break.

When it takes you twenty minutes just to get off Twitter and open the (goddamn) word processing program and there’s still nothing there.

The Dawn Patrol and California Fire and Life by Don Winslow; The Power by Naomi Alderman; Gangster Nation by Tod Goldberg; Tropic of Kansas by Christopher Brown.

I can’t answer this. I come to the end of a lot of books and think, “God, I wish I’d written that.” But then when I get to work again, all I want to do is write the best book that I can. I tend to believe that we can only write our own stories.

Reading. I’ve been told I need to get more hobbies.

TV addict or not? What’s the must watch show in the Farnsworth household?

I used to watch hours and hours of TV, but then I had kids. I’m still an addict though. Right now my favorite shows are Ray Donovan, The Good Place, Archer, Silicon Valley, and Westworld.

I hope I’m still doing this: making up stories and having people read them. This has been my dream job since I was five. I always say I’m the luckiest person I know.