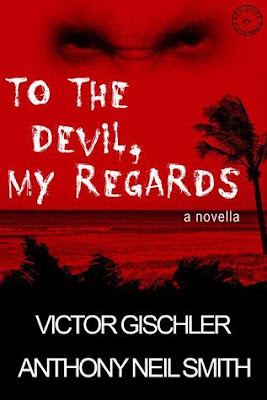 Z.Z. DelPresto is a ne'er-do-well private eye who stumbles into trouble along the beaches of Alabama and Florida. But this time he may have waded out too far. The evidence appears to show him killing the seventeen-year-old girl he'd fallen for. But Z.Z. knows good and well he didn't do it, and now he's in the fight of his life to prove it. Throw in the girl's rich and ruthless parents, some cops who have been trying to put DelPresto away for years, a topless tourist and a stuttering psychic who knows all of tomorrow's sports scores today, and you have a story you just can't put down.

Combine Gischler's colorful eccentricity with Smith's grinding noir, and you end up with this unique novella: To the Devil, My Regards. Originally published in 2001, Gischler and Smith now bring this crazy tale to Kindle, with a new cover by "Pokerben" Springer.

It's been a while since I read anything from either of these two authors after faithfully following them both more than a decade ago. On a bit of a downer after my last book, a quick pick-me-up was in order. Well - at 66 pages it was quick, and enjoyable but not amazing.

We have a PI in the frame for murdering the daughter of his client. The client hired him to gather evidence on his cheating wife, not to sleep with his daughter and definitely not to kill her!

Z.Z. DelPresto surprisingly gets released from custody and works to clear himself. Managing to avoid the attentions of a hitman, turning the tables on him, having a steamy encounter with the dead girl's mother (who just happened to hire the would-be-assassin), an impromptu boat trip with a couple of unsuspecting tourists, and a few more deaths, DelPresto gathers the evidence and cracks the case. News Flash - he didn't do it!

Action, pace, humour, snappy dialogue, a bit of sex and a few decent twists before a believable resolution, I liked it. Worth a pound of anyone's money.

I'm sure they've written a lot better both before and since.

Smith's All the Young Warriors was one of my favourite reads of 2013. All the other books I've read from the pair were in my pre-blogging days.