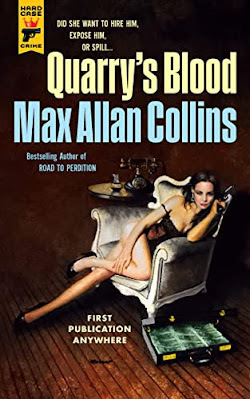 The hitman hero of the acclaimed series Quarry on Cinemax returns for his final act. By Quarry’s creator, the award-winning author of Road to Perdition!

QUARRY'S VIOLENT PAST COMES LOOKING FOR HIM

The professional hitman known as Quarry -- star of the Cinemax TV miniseries of the same name -- has put killing behind him. But after a beautiful writer of true-crime bestsellers drops by to announce he's the subject of her next book, killers descend to give him some of his own deadly medicine, forcing Quarry to journey into his bloody past to find the answers -- and settle old scores.

I’ve been a fan of the Quarry books for a number of years, though haven’t been able to keep pace with them all. Quarry’s Blood is the 16th in the series. I read the first three or four back in 2016, but then got distracted.

Here Quarry’s an old man and is retired. A journalist/true crime author comes to him with some questions, believing that some of the fictional books he authored years ago are thinly veiled accounts of hits he carried out for The Broker before his death. She thinks Quarry was the main hitman and seeks confirmation of some of his deeds.

Between his earlier books, her first book and her intended next book some old acquaintances from the past decide to settle some outstanding blood debts. Quarry and his new confidant go on a hunt with both notebook and gun in hand to try and discover who is trying to kill him. I’m guessing some of the encounters touch on plots and characters from some of the books I haven’t yet read.

Overall I liked it. I like the main character and the trouble author Collins rains down on him. It’s interesting seeing what tricks the older hitman still has up his sleeve. I probably would have enjoyed it a bit more if I had read all the previous books, but that one’s on me not Max Allan.

It’s a definite incentive to backtrack and start again.