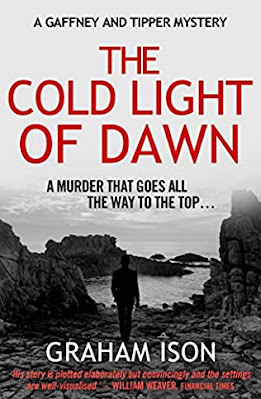 Synopsis/blurb....
As dawn breaks on the coast of Brittany, a retired colonel finds the body of an attractive young redhead washed up on the beach...
In the search for her identification the French police pass her picture to the CID at Scotland Yard, and it is from there that an enquiry spirals into action. As the facts come in slowly but surely, Detective Chief Inspector Harry Tipper and his assistant, Charlie Markham, begin to form a picture of the dead woman and her life, and it's a very strange one at that; provoking sympathy on the one hand and revulsion on the other.
When the occupation of the redhead comes to light, suddenly the case shifts to a more serious crime. As part of the enquiry, Markham spends considerable time bouncing between the people who once knew her. As the number of interviews grows, Markham finds himself getting more and more confused… leaving each interview with more questions than when he started. Surely this redhead wasn’t as complicated as she sounded?
The investigation deepens, and the enquiry eventually leads to Whitehall and the highest echelons of the Diplomatic Service, causing the CID to call upon the powers of Special Branch, and even MI5, in their bid to unravel all the strands of this compelling mystery. A few things seemed to ring common amongst those who knew her: she was always broke, and she was full of surprises… But one of these people had something to hide, and Markham was determined to figure out which one...
Graham Ison has produced a stunning first novel, showing the painstaking thoroughness of a murder enquiry and the logical assembly of evidence. The Cold Light of Dawn is a chillingly real tale that will absorb its readers.
The Cold Light of Dawn is the first of four books in Graham Ison's Gaffney and Tipper Mystery series. I'm not sure how I crossed paths with it but I'm glad I did.
A dead body washes up on the French coast. An investigation is opened. Initially it could be accidental drowning or suicide, murder is not suspected at first. The focus transfers to London, her identity is established and our detectives try and dissect the victim's life and the people in it, straying into boundaries of the intelligence service and civil servants.
I think what I really enjoyed about this one was the slow, pace of the investigation which added a level of realism to what was a difficult case. There's no supercops involved, the ones who solve the case within twelve hours and are the toast of the force with celebratory drinks all round. Here we have diligence, commitment, dedication and a lack of ego. There's a level of cooperation between the French authorities and the British; one you might hope could be replicated at all levels between the British and French post-Brexit. I'm not holding my breath.
In time, we discover who the victim was as a person, what she did and how she lived. She was a bit of a schemer, planner and user; happy to use her assets and attributes to get on, to be kept and supported. Despite her unattractiveness as a person, Gaffney and Tipper still try and bring her murderer to book.
I really liked this one. Complex, thoughtful, interesting seeing the procedures and processes at play, initially in France, then the slow piecing together of a victim's life, her movements and interactions. Finding the inconsistencies in her contact's (now potential suspects) accounts, finding a motive for murder and eventually uncovering the killer, long after he thought he had gotten away with it.
I've been reading in the crime/mystery genre for longer than Graham Ison has been writing in it, yet I had never heard of him in thirty-odd years until now. This is an impressive debut novel and I intend to read more from him going forward starting with the second one on this series.
Plot/story, pace, setting, outcome all plusses. I'll have to pay more attention to the main characters next time around, as a few month's on not too much stands out about them.