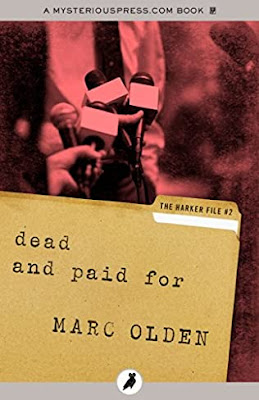 Synopsis/blurb....
To protect the families of missing veterans, Harker could go missing himself....
The US Army is out of Vietnam, but not all of its boys made it home. Thousands remain unaccounted for, and as the years go on, their families hold out hope that somewhere in the jungle, their boys survive. Harker, an investigative reporter, has uncovered a sickening scheme designed to prey on that misguided hope. A group of con men is going to the homes of missing soldiers, telling families that their GI is trapped in a secret Vietnamese prison, and can return home for a small ransom. When the family forks over the money, they disappear. Harker has exposed the con, and now he wants to punish those responsible.
The mastermind is an unscrupulous security contractor named D. Z. Vale, who backs up his despicable scheme with a private army and an unlimited cache of ammunition. Harker has his typewriter, and it's the only weapon he'll need.
Another enjoyable encounter with Marc Olden and his investigative reporter Hawthorne Albert Harker – just Harker please.
Olden penned four books featuring his reporter and this one is the second after The Harker File.
We have a Vietnam backdrop with a gang of enterprising criminals targeting a dementia suffering businessman and grieving father in a $500k sting operation. The money can help facilitate the release of the man’s son, held in a secret Vietnamese POW camp and forgotten by the US authorities, now that the conflict is officially over. The man’s other son is an ambitious politician and needs the half a million to launch a political campaign. He ropes in Harker to expose the con men and save his ambitions.
An investigation ensues in the face of some strong-arm tactics from the gang. Harker suspects they were involved in a previous scheme involving trafficking women to Saigon for the pleasure of some high-ranking politicians and military men. The powerful contacts have endured the collapse of that scheme with a patsy paid to take the fall. Harker at no little risk to his own safety digs deep and tries to derail the plan.
Harker as a main character is a grower. I think I liked him a bit more than first time around. He believes in exposing wrong-doing and is on the side of the little person. He’s not a physical presence in either of the books, though does sometimes bluff a reluctant witness with mild threats of intimidation. He values his life, but if it’s a case of back down or run a risk to get the story, the story wins every time. He has an ex-wife his remains friendly with. She’s a high-class escort and Harker still seeks comfort and respite with her, despite them divorcing a year or two back.
Dead and Paid For is another cracker of a quick read. Author Marc Olden doesn’t hang about and gets the tale told in less than 200 pages, without ever seeming to rush things. I’m happy to be finally catching up with his work albeit over forty years late.
4 stars from 5
The Harker File and Narc has been enjoyed before.
Read - June, 2022
Published - 1976
Page count - 186
Source - Kindle Unlimited
Format - Kindle
Posted by col2910 at 07:55