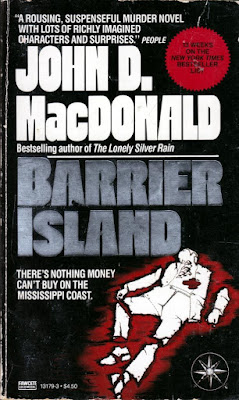 Synopsis/blurb...
There are two kinds of men in Mississippi. They make natural enemies. And sometimes, but only if the balance between strength and weakness tips too far, unnatural allies.
Tucker Loomis is a hard and dangerous man with a ruthlessness all West Bay fears and respects, and an improbable amount of money. Wade Rowley is a common man who aspires to honor but gets caught up in the footwork of a skilled swindler.
In a pitiless game, with a few harsh rules and just one way of keeping score, the wrong man will die. And another will get away with more than murder.
Barrier Island was MacDonald's last published novel and came out in 1986, the year he passed. Having only read some of his Travis McGee series, I've been wanting to read some of his standalone novels for a while. I found a few copies of his novels including this one when on a recent visit to Amsterdam to see my son. Unusually for me, I started reading this the day I bought it.
I really liked it. At it's heart it's a tale of two men. One powerful, ambitious, ruthless, avaricious vs one who is moral, principled, upstanding, family and community oriented.
Property development, planning, gentrification, expansion, corruption, profit, loss of habitat, threat to nature, wildlife, environment, conservation, government money, power, sex, lawyers, business partners, bribery, blackmail, murder, family, changing relationships, different goals and a lot more besides.
I liked the conflict in the book.
In the dark corner, Tucker Loomis with his arrogance and wealth believing he is untouchable, that the world will always bend to his will, manipulating and using people. There's no limit to his ambition. The proposed scheme to develop Bernard Island proves that.
In the light corner, Wade Rowley, a lawyer concerned about the road his business partner, Bern Gibbs is taking their practice down, the changes in his friend, the accommodations he is making, the alliances they have made, the deal with the devil and the resulting jeopardy he has put both them and their law firm in.
A bit of digging in the firm's case files is warranted and results in some whistleblowing which sets off the chain of events.
Great story, great characters and setting, decent pacing, satisfying outcome.
4 stars from 5
I'm looking forward to reading more from John D. MacDonald's body of work in the future, both standalones and revisiting the McGee series. 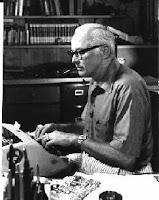