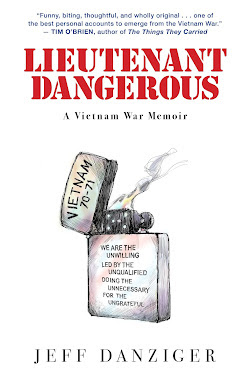 Synopsis/blurb ....
Jeff Danziger, one of the leading political cartoonists of his generation, captures the fear, sorrow, absurdity, and unintended but inevitable consequences of war with dark humor and penetrating moral clarity.
If there is any discipline at the start of wars it dissipates as the soldiers themselves become aware of the pointlessness of what they are being told to do.
A conversation with a group of today’s military age men and women about America’s involvement in Vietnam inspired Jeff Danziger to write about his own wartime experiences: “War is interesting,” he reveals, “if you can avoid getting killed, and don’t mind loud noises.”
Fans of his cartooning will recognize his mordant humor applied to his own wartime training and combat experiences: “I learned, and I think most veterans learn, that making people or nations do something by bombing or sending in armed troops usually fails.”
Near the end of his telling, Danziger invites his audience—in particular the young friends who inspired him to write this informative and rollicking memoir—to ponder: “What would you do? . . . Could you summon the bravery—or the internal resistance—to simply refuse to be part of the whole idiotic theater of the war? . . . Or would you be like me?”
"Funny, biting, thoughtful and wholly original." —Tim O'Brien, author of The Things They Carried
Many years ago - 30 plus probably - most of my adult reading time was consumed by memoirs and fiction relating to The Vietnam War. I had a morbid fascination for it. I still have a lot of books relating to the subject, but my tastes have moved on since then. Seeing this one though, I thought I would have a re-visit.
Overall, I liked it without being stunned or amazed. A lot of the memories and events that are relayed concern Danziger's training stateside, which if I'm honest interests me less than the sights and sounds and smells of boots on the ground in a war zone.
I think what is apparent (and I didn't need this author to tell me so) is how ill-advised the war was and how the chaotic the military thinking was. Danziger was given specific language training for Vietnam, but his actual posting did not take advantage of the skills he had been taught. I guess that was the case for a lot of young men who were drafted or volunteered. Big corporations and entities seem to suffer from a lot of waste and inefficiency, maybe more so in the 60s and 70s before the age of consultants and out-sourcing. They didn't come much bigger than the US Army back then.
I didn't mind retracing Danziger's footsteps as a twenty year old. I was never bored with the book, but in truth just maybe a tad disappointed. I've been moved and invested more emotionally in some other writers' Vietnam related works - Larry Heinemann and Tim O'Brien to mention two. 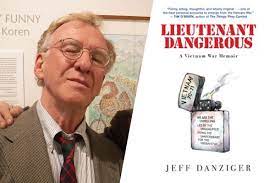