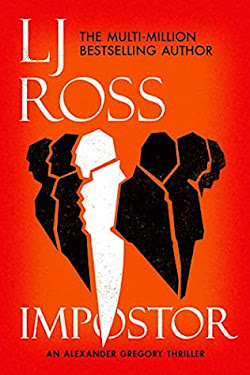 Synopsis/blurb ...
There’s a killer inside all of us…
After an elite criminal profiling unit is shut down amidst a storm of scandal and mismanagement, only one person emerges unscathed. Forensic psychologist Doctor Alexander Gregory has a reputation for being able to step inside the darkest minds to uncover whatever secrets lie hidden there and, soon enough, he finds himself drawn into the murky world of murder investigation.
In the beautiful hills of County Mayo, Ireland, a killer is on the loose. Panic has a stranglehold on its rural community and the Garda are running out of time. Gregory has sworn to follow a quiet life but, when the call comes, can he refuse to help their desperate search for justice?
Murder and mystery are peppered with dark humour in this fast-paced thriller set amidst the spectacular Irish landscape.
An enjoyable first outing with author LJ Ross and the opener to her Alexander Gregory series, Impostor.
A young married mother is murdered in a small village community in Mayo. The police are clueless and send for London based psychologist, Alexander Gregory to help build a profile of the killer.
I enjoyed the setting for this one and Gregory's involvement in the investigation, which seems to be very much a family affair. The matriarch, Maggie Byrne is the town's mayor and her two sons, Niall and Connor work for different branches of the Garda Síochána and are heavily involved in the investigation - too close probably.
We have a further murder and Gregory's thoughts on the killer's motivation and issues. There's a flip-flop back to London and Alex's daily life and patient case load. Back in Ballyfinny, we have a growing list of possible suspects, including the Mayor's sons, a local priest and some other characters we meet from the small village.
When the revelation came as to the killer's identity, it wasn't someone I had previously considered, though it wasn't quite so left field that I felt the author had taken liberties.

Overall, I enjoyed the story and the narration was good. The outcome was credible, the characters well developed and the book carried along at a decent clip. LJ Ross is definitely an author I'll be reading
more of in the future.
4 from 5
Read - (listened to) October, 2021
Published - 2019
Page count - 311 (7 hrs 3 mins)
Source - Audiobooks
Fomrat - Audible
Posted by col2910 at 05:16