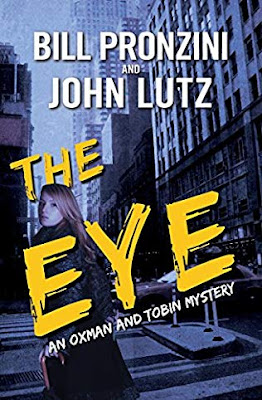 Two award-winning masters of crime fiction, Bill Pronzini and John Lutz, join forces for a chilling tale of a serial killer who targets the residents of a single city block on Manhattan's Upper West Side

Lewis Collier watches the people living on West 98th Street through his telescope, the "Eye of God," ready to mete out the ultimate punishment for every perceived sin. Those who transgress must suffer and die, and no one is safe - not the building superintendent or his junk collector friend, not the musician or the brave and beautiful woman who has struggled back from a nightmare of pain and brutality.

Detective E. L. Oxman of the NYPD is assigned to investigate the bloody horror that has descended on the frightened residents of the terrorized neighborhood. But Oxman's adulterous attraction to Jennifer, an abuse survivor, has caught Collier's attention. And all sin is punishable by death.

Separately, Bill Pronzini and John Lutz have won numerous prizes for their acclaimed mystery and suspense novels, including the coveted Edgar and Shamus Awards, two of crime fiction's most prestigious honors. With The Eye, these giants of the mystery genre have combined their remarkable talents in a truly unforgettable collaboration.

A collaborative effort from Bill Pronzini and John Lutz and one which has me a tad curious, as to why. Judging by their lengthy individual bibliographies it seems a book either would be capable of penning alone. I digress.

It's one from the mid 80s, which was republished by Open Road Media in 2014. After five years on the TBR pile, I finally got around to reading this Net Galley reviewer copy. (Hangs head in shame.)

I'm not usually a massive fan of the serial killer type novel, but I enjoyed this one.

New York/New Jersey setting, a deranged killer with a God complex punishing sinners in a Manhattan neighbourhood and the police efforts to stop him.

Our killer chooses his victims, seemingly at random, as other than location there is nothing that really ties them all together. It's a puzzle for the cops and our main detective E.L. Oxman. We spend a lot of time in Oxman's company interviewing the residents of a particular building which the killer seems focused on. We get Oxman's back story, his career progress or lack of, his loveless marriage and the trials and tribulations that living with an unwell, irrational partner can bring. Little wonder he feels an attraction to  one of the residents of the West 98th Street block, the sexual partner of our first, but not our last victim.

We also spend time in the killer's company, and get the opportunity to see him at work, selecting his victims and following through on his plans. We are also privy to his method of surveillance and selection, something which puzzles the police. We also get a few of the resident's stories, including a manipulative burglar, an unsuccessful actress turning to shop lifting to support herself, the slow-witted building supervisor and his junk collecting, card playing friend.

Oxman, after taking the relationship between police and witness beyond professional boundaries finds himself the new target of the deranged killer. Oxman has sinned and a battle of wills ensues.

I liked the vibe from this one. The plot was interesting, I enjoyed the story telling and the time spent with the other characters on the block, Oxman's relationships with his boss, his colleagues, his wife and the new woman in his life and if I didn't quite buy into the killer's motivations it didn't matter.

I enjoyed the escalation, the increased pressure on Oxman and the force in general, their methods to keep the residents safe and catch the killer, the paranoia and fear of  the locals, the media reporting and the lightbulb moment for Oxman that advanced the hunt. All realistic and well told.

Overall a decent holiday read and one which didn't have me wanting to put the book down at any point and try something else.

Bill Pronzini has been enjoyed many times previously - about a dozen time with his Nameless PI books. It was my second time reading John Lutz. Probably not my last.