JAMES NEWMAN and MARK STEENSLAND - IN THE SCRAPE (2019) 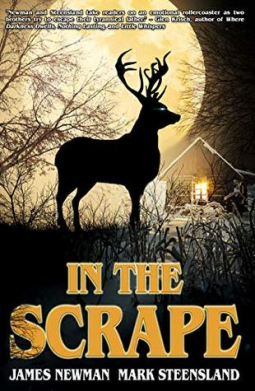 Most kids dream about a new bike, a pair of top-dollar sneakers endorsed by their favorite athlete, or that totally awesome video game everyone’s raving about. But thirteen-year-old Jake and his little brother Matthew want nothing more than to escape from their abusive father. As soon as possible, they plan to run away to California, where they will reunite with their mother and live happily ever after. It won’t be easy, though. After a scuffle with a local bully puts Jake’s arch-nemesis in the hospital, Sheriff Theresa McLelland starts poking her nose into their feud. During a trip to the family cabin for the opening weekend of deer-hunting season, Jake and Matthew kick their plan into action, leaving Dad tied to a chair as they flee into the night. Meanwhile, the bully and his father have their own plans for revenge, and the events to follow will forever change the lives of everyone involved . . .

Another one-sitting read which provided my first taste of co-author's James Newman and Mark Steensland. In the Scrape offers up a coming-of-age tale for two brothers, Matthew and Jake.

A difficult childhood, abandoned by their mother, raised by a volatile, unpredictable father, plagued by bullies at school, the boys only have each other and dreams of a better life, not quite buying into the narrative that their father spins about their mother. The plan is to raise some money and run to California to live with their mother.

I really liked this one. You would need a heart of stone not to empathise with the two brothers. You will them to succeed and you shudder at every setback along the road. Not a story with a totally happy ending, but maybe the best outcome in the circumstances.

Short, sharp, thought-provoking, sad, hopeful, a tale of love and determination with characters you root for.

Definitely a pair of authors I would be keen to read more from in the future, either collaboratively or on their own.