Another author with about six books on the TBR pile, maybe more and I've never read him. Ridiculous really. I have heard good things about Thomas H. Cook though. 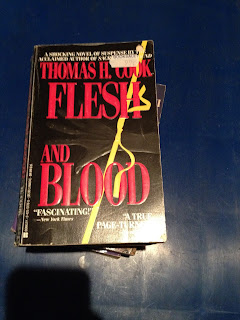 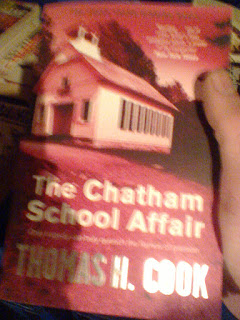 Cook - no relation to the recently bankrupted travel agents - has written over 25 novels in his career, most of them stand-alones. There are three in his Frank Clemons series of which Flesh and Blood is number two.

Thomas H. Cook was born in Fort Payne, Alabama, and holds a bachelor's degree from Georgia State College, a master's degree in American History from Hunter College, and a Master of Philosophy degree from Columbia University.

From 1978 to 1981, Cook taught English and History at Dekalb Community College in Georgia, and served as book review editor for Atlanta magazine from 1978 to 1982, when he took up writing full-time.

Cook began his first novel, Blood Innocents, while he was still in graduate school.[2] It was published in 1980, and he has published steadily since then. A film version of one of his books, Evidence of Blood, was released in 1997.

Six of his novels have been nominated for awards, including Red Leaves in 2006, which was also shortlisted for the Crime Writers' Association Duncan Lawrie Dagger and the Anthony Award, and went on to win the Barry Award and the Martin Beck Award. 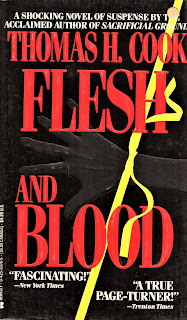 Rich in character, complex in plot, Cook's second Frank Clemons novel, after the much-praised Sacrificial Ground , finds the former homicide detective relocated in New York. Now a private eye, Frank lives with Karen on the upper East Side, but he is falling out of love and becoming increasingly aware that his real sympathies lie with Manhattan's less-privileged citizens. That's one reason why he is drawn to the case of Hannah Karlsberg. Hannah, in her 70s, was brutally murdered (her right hand chopped off) in her apartment; her employer, a high fashion designer, hires Frank to locate Hannah's next-of-kin so the body can be released and buried. But Hannah's past is full of gaps and contradictions, and Frank is soon on a trail that begins in the Lower East Side sweatshops of the 1930s, where Hannah was a forceful strike leader for the American Garment Workers' Union. The scent then leads to a small village in Colombia, and ends in a settlement house in Brooklyn. Frank's investigation is steeped in a deep personal, lyrically evoked sorrow; talking with Hannah's old co-workers, he uncovers dark deeds and omissions that resonate with his own growing sense of isolation and betrayal. Cook constructs a many-layered and shimmering tale in which the history, locale and personality build to an unsuspected, satisfying end. BOMC alternate; Detective Book Club and Mysterious Book Club main selections.

Library Journal
Former policeman Frank Clemons, a private investigator, is hired by famous dress designer Imalia Covallo to find a relative of her slain employee so the police will release the body for burial. Frank reconstructs the dead woman's past: a garment worker and union activist, she mysteriously left for South America only to reappear in New York as the unknowing sidekick of a drug runner; she was a diligent assistant to Covallo. Frank experiences a deeply felt empathy for the woman and ends by discovering her murderer. Strong prose and steel-etched characters complete an enticing puzzle. Detective Book Club main selection. REK

As he draws up his will, Attorney Henry Griswald is haunted by a long-buried secret: the truth behind the event the world knew as the Chatham School Affair, a controversial tragedy that destroyed five lives, shattered a quiet community, and forever scarred the young boy. Layer by layer, Cook paints a portrait of a woman, a school, and a town in which passionate violence seems impossible... and inevitable.
Posted by col2910 at 23:24