A couple of short French crime novels from Jean-Patrick Manchette. 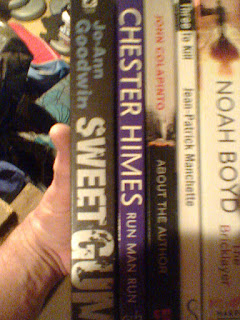 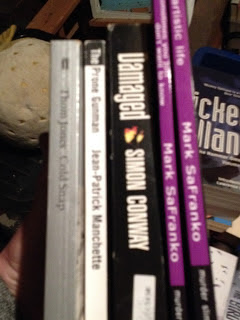 Manchette had five novels published in English during his short life. He died in his early fifties in 1995.

According to his page at Fantastic Fiction he wrote ten in his lifetime, I'm guessing some of them never made it into English translation.

Late one night in Paris, travelling salesman Georges Gerfaut stops to help an injured motorist to hospital. Three days later, while Gerfaut is on holiday with his wife and daughters, he is attacked by two men. Quickly realising the duo?s murderous intent, but perplexed as to their motives, Gerfaut goes on the run, communicating with his family by telegram. Terrified, yet exhilarated by this release from his humdrum life, Gerfaut resolves to turn the tables and track down his pursuers.

Jean-Patrick Manchette presents a clash between two opposing worlds: a conventional, middle-class existence cluttered by possessions and responsibilities, and a violent criminal underworld. In Georges Gerfaut we find an unlikely hero, an ordinary man thrust into extraordinary circumstances and forced to fight for his life. Three to Kill is another riveting slice of ?70s noir by a masterful stylist, ironist, and social critic. 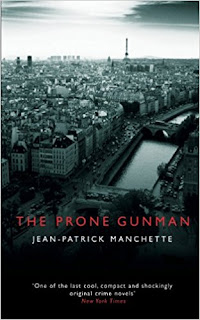 Deadly professional assassin Martin Terrier returns to Paris after his latest job determined to get out of the game. Ten years ago he made a promise to return to his childhood sweetheart in the south of France. But circumstances put Martin's attempted retirement on hold: a key target is flying in to Paris, and there is only one man fit for the task of eliminating him. As Martin flees southwards, desperate to return to the crushing mediocrity of life in a backwater town, he finds his former employers will stop at nothing to regain his services for one last job.

Bursting with Gallic irony and visceral brutality, The Gunman (originally published in English as The Prone Gunman) is a shocking and sardonic masterpiece from the late, great master of the French crime novel, J-P Manchette.