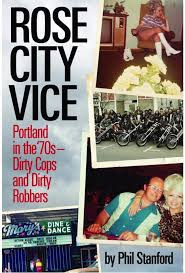 The City of Roses, as natives of Portland, Oregon like to call it, has a long and honorable history of crime and corruption, starting as far back as the post-Civil War frontier days, leading into the mobster-infused decades of the twentieth century when prohibition, prostitution, gambling, and hard drugs besieged the town.

The so-called "Great Portland Vice Scandal of 1956-57" spilled into national politics, with hearings before the Senate Rackets Committee. When the '70s rolled around, members of the police's narcotics squad were caught red-handed perpetrating nefarious deeds. This Northwest city, known best today for its punk rock and hipster comedies like Portlandia, was once overrun with corruption and foul play.

Rose City Vice reveals a city where the cops are putting drugs back on the street, maybe even committing murder. The city council is high on coke, and the mayor is carrying on a clandestine sexual relationship with 13-year- old schoolgirl while under surveillance by the vice squad. It's 1970's Portland and blackmail is in the air.

My first bit of non-fiction for a while and at times I was scratching my head thinking this can't possibly be true! I don't suppose there is anything new about dirty cops in bed with politicians, but the tale Stanford tells is of a city where corruption seemed to be endemic and the norm as opposed to the odd bad apple.

This is Stanford's third book about Portland after Portland Confidential and The Peyton-Allen Files. One deals with vice and the other the unsolved early 60s murder of a couple of teenagers. He seems to know his city.

Short chapters with plenty of photographs of some of the city's larger than life characters and an expose of organised vice with hookers and blow jobs auditions, under-age sex, drug deals, dodgy cops, rip-offs, lost case files, ultra lenient courts, missing drugs, bent officials and a lot more. The writing reminded me a bit of James Ellroy's Hush-Hush exposures in his LA Quartet.

I really enjoyed this one. Portland in the 60s and 70s and probably earlier seemed reminiscent of a lawless Wild West town in the 19th century.

A minor criticism and only a mere quibble was the formatting of my ARC copy for Kindle which seemed to jump around a bit. Photo captions would sometimes appear in the text on the following page. I think the book is only available in print, so I would imagine it won't be an issue.

Phil Stanford is an American journalist and author. Some of his investigative reporting has helped overturn some unfair convictions in the past.