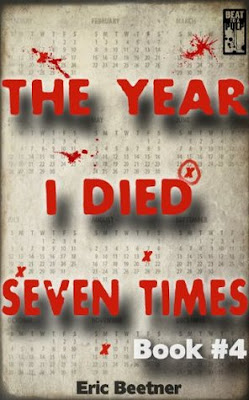 Recovering from a forced heroin overdose, Ridley has stopped looking for Miho ... for a few weeks anyway. This time he gets his hands on the first real clue, and makes a new contact who may have information.

Some things haven’t changed: Miho’s ex-roommate still hates Ridley, and he still has little to go on. And with new leads, Ridley may have just walked in a trap he cannot escape from.

As summer looms in Los Angeles, Ridley will battle a death squad in the night and learn crucial new information that may lead him closer to Miho, or it may get him killed again. Ok, it will definitely get him killed. Yeah, for sure.

The year is half over and the mystery deepens. Next up -- July. The action is heating up and sooner or later Ridley is going to encounter a death he can’t wake up from.

Not much to say that hasn't been said before with the previous episodes of this 7-parter.

Short and enjoyable with enough action, dialogue and character on display to keep me engaged.
Over halfway through and we are still on the trail of the disappeared girlfriend Miho and there are still people unhappy at Ridley's digging and their continued suspicion that he's involved with the FBI. Hardly a spoiler to advise that Ridley is going to get himself killed again.

Eric Beetner entertains me and gives a helpful padding of the reading statistics at the same time.

The Year I Died Seven Times was originally released over a number of months in 2014 before being combined into the one edition on sale today.

Click on the title for some semi-coherent thoughts on Book 1, Book 2 and Book 3