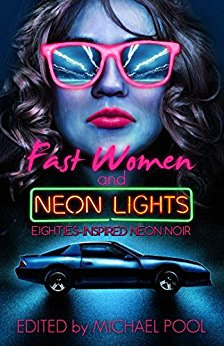 The Fast Women and Neon Lights anthology is a wild criminal romp inspired by eighties crime movies and television shows, as well as the wacky, over-the-top eighties style and aesthetic.

An impressive collection of 80s themed short stories which were enjoyed over the course of the past couple of months, rather than binge reading them.

There’s 18 stories in the collection as well as an enjoyable foreward by Will Viharo. I wonder how many people can drop the bomb “Mickey Rourke bought me my first car” into a conversation.

I’ve enjoyed longer works by just under half the contributors to the anthology, so my expectations were high

VALLEY GIRL by Kat Richardson …… reminded me of Little Britain’s Vicky Pollard. I’m not sure if that’s the voice Richardson was striving for, but she nailed it if it was.

THE DEEP END by Dietrich Kalteis …. insurance investigator turns rogue and gets the girl

BESTIES & BLOW by Sarah M. Chen ….BFF as long as the drugs don’t run out

BIG HAIR, BANANA CLIPS, AND THE FIGURE-FOUR LEGLOCK by Nina Mansfield …. wrestling dreams and a bout with a predator

DUTCH by C.S. DeWildt … a cross and double-cross, falling for the wrong girl

GETTING SECONDS by Greg Barth … robbery and a ruined life, back for seconds and some fixing getting done

CAUGHT ON VIDEO by Brian Leopold … cameras, sex tapes, blackmail and a sting

FLECKMAN’S FIX by Preston Lang … gambling and some sore losers

LAST DANCE AT THE GLIMMER LOUNGE by S.A. Cosby … a drug deal, a rip-off and getting played by the girl

NIGHT THIEF by Michael Pool … a professional car thief and his last job, things don’t quite go to plan

A top class collection with each story delivering on the 80s theme.

Favourites were Jen Conley's In the Swimming Pool and The Envelope by Linda L. Richards. Not a dud in the collection. 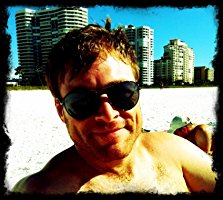 His short novella - Midnight at the San Franciscan was recently enjoyed - thoughts here.