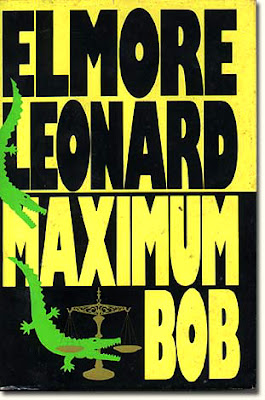 Enter the world of Elmore Leonard. The setting is Palm Beach County, Florida, where someone places a live ten-foot alligator in the backyard of the bigoted, redneck judge Bob Gibbs--known to all as Maximum Bob--and his wife, Leanne, a former Weeki Wachee mermaid. Not long after that, shots are fired into the judge's house. It doesn't take much figuring to conclude that someone's out to get him and that malefactor isn't going to stop at the second try. There's a long list of suspects: Dale Crowe, who just got an outrageous sentence for a minor crime; his uncle Elvin, a killer on parole, raring to go again; Dr. Tommy Vasco, the drugged out former medical doctor; his equally bizarre friend, Hector; and Dicky Campau, who makes a living poaching alligators. And there are others.

Somehow Kathy Baker, a nifty young probation officer, has got herself in the middle of all this. She's got to avoid two seducers--the judge and a homicidal maniac--and work with a young police officer who interests her for more than professional reasons. Trying to pick out from his assortment of bad guys, sociopaths, and punks the one who's trying to kill the judge is pure entertainment, as only Elmore Leonard, with his ear for the sound and eye for the sight of lowlife, can provide.

A January re-read and another enjoyable encounter with Elmore Leonard and a strange cast of characters.

A sex-mad judge called Maximum Bob, someone who might need some self-improvement classes -offering a court reporter the opportunity to play a carnival game…”You sit on my face and I guess your weight.” His wife, Leanne frequently given to startling fugue states where she assumes the speech and mannerisms of a long dead slave girl. An attractive probation officer, Kathy Baker – someone who grabs the attention of our randy judge. A couple of criminal Crowes – a nephew, Dale – young likeable, a tad reckless but unfairly shafted by Bob; his psychopath uncle – Elvin, vicious, scheming but never less than interesting. A 10ft alligator. A disgraced doctor and his boyfriend – living the life strung out on drugs.  A young handsome cop – Gary Hammond.

In a nutshell - the judge has tired of his wife and wants her to leave and some former inhabitants of Bob’s court plot revenge on him.

Madcap characters, inimitable humour, great dialogue, bizarre situations, violence and death. A bit different from a lot of the crime fiction out there.

Really enjoyable – even if after about a dozen pages I realised I had read it before. Fortunately it was long enough ago that I couldn’t remember the outcome. 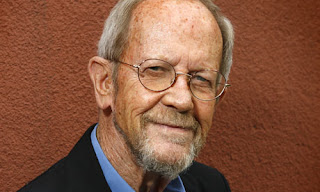 Elmore Leonard was my first introduction to the crime fiction genre after picking up a book of his which had been blurbed by Stephen King. This would have been late 80s. Prior to that my reading was firmly ensconced in the horror zone.  Leonard sadly passed in 2013. I have a lot of reasons to be grateful to him.