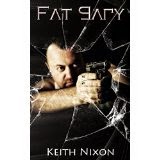 Vengeance stalks Konstantin Boryakov in the obese shape of Fat Gary.
From the author of The Fix comes another episode in the life Konstantin Boryakov, the enigmatic tramp who claims to be ex-KGB and in hiding. A man with a dark past and a darker future.

Konstantin receives a letter. Perfectly normal for you and I, but not for our Russian. Because no-one should know who he is, or where he lives. Apparently Konstantin has inherited some money. He knows there’s something very wrong with the picture, but Konstantin can’t help check it out.

Enter Fat Gary and his gang, a big man with a bigger score to settle, back from when Konstantin first arrived in Margate.

But that’s not Konstantin’s only problem. A bed-ridden Fidelity Brown is getting bored…

Another outing with Konstantin Boryakov and another enjoyable hour or so reading Keith Nixon’s violent but humorous tales of our enigmatic ex-KGB operative.

Konstantin has been targeted in revenge for a happening in an earlier episode - Dream Land.

Someone is trying to set him up and despite his caution, our man meets is intrigued and decides to let the situation develop – it might make a change from drinking vodka and pub brawls.

Fat Gary and his cohorts have headed south from Liverpool to extract some street justice. Konstantin gets a bit of an outing around Kent having received a letter purporting to be from a firm of solicitors. Having rocked up at the rendezvous with his spidey senses on full alert, the inevitable violence flares. Guns are drawn and our Russian has reason to be thankful for the intervention of Fidelity AKA Plastic Fantastic - arisen from her sick bed.

Fat Gary and his chums soon have further cause to regret the trip south as other elements of Margate’s underworld cover Konstantin’s back.

I like the grit, the action, the characters, the run-down setting and as much as anything the humour and imagery Nixon introduces. When Gary is laying in his hospital bed, feeling a tad sorry for himself – the last thing he wants is the chippy OAP in the next bed giving him grief……

The old guy in the next bed farted and cackled.
See what I mean?” said Fat Gary.

When our fake lawyer reports back to Gary’s Liverpudlian cohorts by phone….Frank sighed. Neil could imagine his fingers, the size of healthy sausages, gripping the phone tightly.

The third instalment in Nixon’s Russian Roulette collection rates as a 5.

Dream Land and Plastic Fantastic were read and reviewed earlier.

Bought earlier this year on Amazon for Kindle
Posted by col2910 at 00:27