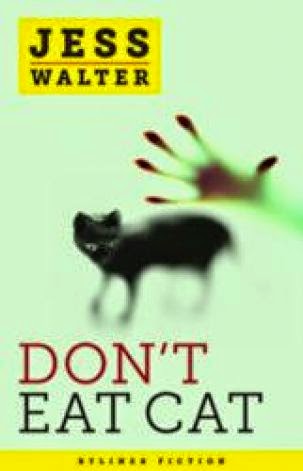 In this brilliantly entertaining send-up of zombie lit, Edgar Award winner and National Book Award finalist Jess Walter offers a twist on America’s favorite monster: You don’t have to be dead to be a zombie. Walter creates a postapocalyptic nightmare that is as sidesplitting as it is moving—and all the more damning because it’s so recognizable.

Set in the year 2040, amid rolling epidemics, economic collapses, ozone tumors, genetic piracy, and an Arizona border war, “Don’t Eat Cat” is the story of Owen, a guy who just wants to forget the results of his recent full-body scan with a grande soy latte before going to work in Seattle’s food/finance district. The world has gone straight to hell, and the most horrifying part of it is that not a damn thing has changed: You still have to go to work, you still don’t have a girlfriend, and, unbelievably, the line at the Starbucks Financial still stretches on forever. Why? Because there’s a zombie working behind the counter, an addict of a club drug that causes its users to become aggressive, milk-pale, dead-eyed dimwits with an appetite for rodents and house pets—cats in particular (and, in very, very rare cases, humans).

When Owen finally makes it to the head of the line, the afflicted barista’s people skills falter under pressure and he mauls the store manager. It’s the first documented zombie attack in months, and it sets the sim-tweets buzzing, ultimately ending in a vigilante killing. As for Owen, he gets more than a free latte out of the incident: He’s forced to confront the brokenness of his present life by venturing into the past. With the help of a private investigator, he heads into Seattle’s Zombie Town to search

In “Don’t Eat Cat,” some highs are better than a lifetime of being human.

Jess Walter is one of my favourite authors, a position I have adopted on the strength of having read two of his 6 novels thus far. On the stacks still are The Zero, Over Tumbled Graves, Land of the Blind and The Financial Lives of the Poets, as well as his collection of short stories – We Live in Water.

So I had fairly high expectations approaching this 30-odd page novella.

Plus points – it was short and cheap and it notched up another score on the reading tally for the year. And in my OCD completist world it has ticked off another Walter title, adding to the couple I have previously read and enjoyed – Citizen Vince (5 star – but pre-blogging days) and Beautiful Ruins (4 star review – here). It would always have slightly niggled me knowing it was there and I hadn’t read it.

Enjoyable? Not especially. I hadn’t done my homework before purchasing this cheap kindle single. Not a fan of futuristic tales and not a fan of zombies or zombie tales, so a short lesson learned in that author name, even an author who you hold in the highest esteem, isn’t always everything.

I read until the end, I followed it, I didn’t get lost, I didn’t switch off and daydream, I didn’t want to be doing anything other than reading it.  It made sense. I just didn’t particularly enjoy it.

Jess Walter’s website is here. I’m looking forward to reading something longer from him in the next year or so. Still a favourite!

Purchased earlier this year or late last year on Amazon for kindle.
Posted by col2910 at 00:30