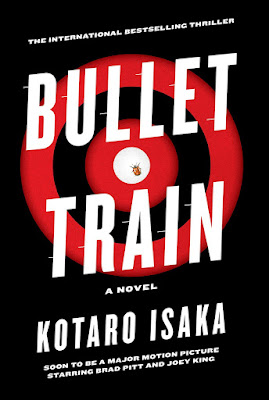 Synopsis/blurb ...
Five killers find themselves on a bullet train from Tokyo competing for a suitcase full of money. Who will make it to the last station? An original and propulsive thriller from a Japanese bestseller.
Satoshi looks like an innocent teenage schoolboy, but he is really a viciously cunning psychopath. Kimura's young son is in a coma thanks to Satoshi, and he's tracked him onto the bullet train headed from Tokyo to Morioka to exact his revenge. But Kimura soon discovers that he and Satoshi are not the only dangerous passengers onboard.
Nanao, the self-proclaimed 'unluckiest assassin in the world', and the deadly partnership of Tangerine and Lemon are also travelling to Morioka. A suitcase full of money leads others to show their hands. Why are they all on the same train, and who will get off alive at the last station?
A bestseller in Japan, Bullet Train is an original and propulsive thriller which fizzes with an incredible energy as its complex net of double-crosses and twists unwinds to the last station.
Really enjoyable, fast-moving, exciting, funny, frustrating and satisfying.
Multiple killers on a train, as well as a recovered kidnap victim and a suitcase full of cash. I liked the set up here and the ever changing POV of the narrative. Each chapter offers a differing take, each character, with the exception of the double act, Lemon and Tangerine have different agendas, goals and reasons for being on this particular high speed bullet train.
Plenty of action, incident, conflict and death with certain characters departing the scene and new combatants joining the fray. I really liked how the author had me sympathising with most of the protagonists at one point or another. It was almost like a knockout cup competition with my team getting eliminated, and my hopes of whichever character I had nailed my colours to prevailing, continually getting dashed. One character, Prince was the exception. I hated him from first encounter to last and fervently wanted someone to clean his clock for him.

Along with our train ride, we get backstory and family history and motivation for a lot of what happens. Some of the action is not just confined to the train.
A good time was had.
4 from 5
Read - October, 2021
Published - 2021
Page count - 432
Source - Edelweiss Above the Treeline reviewer site
Format - Kindle
Posted by col2910 at 05:04