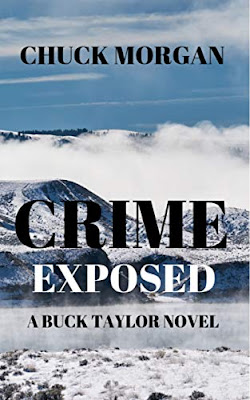 Fresh off investigating the ambush murders of two police officers, Colorado Bureau of Investigation Agent, Buck Taylor and his team are called upon to find a missing journalist, in a case that leads to murder and child pornography, in the much anticipated fourth “Crime” novel.

She was about to thank the Good Samaritan when he reached a huge hand behind her head and in one swift move slammed her forehead into the steering wheel. The blow was so hard that it cracked the top of the steering wheel. It took two more blows to knock her out.

He put the car in gear and, checking once more up and down the highway, pushed the car past the end of the guardrail and stopped it at the edge of the drop-off. The reservoir was still frozen, but he hoped that enough of the thaw had occurred to make the ice thin enough so the car would crash right through it. He was confident that the snowfall that was underway would cover the hole in the ice.

With one last look up and down the empty highway, he closed the door, walked behind the car and gave it a shove. With a grinding of metal against rock, the car bounced over the edge and rolled down the side of the reservoir, crashing into the ice with a loud bang, and after a second’s hesitation, broke through the ice and disappeared beneath the surface. He stood on the shoulder of the road and watched until the taillights blinked off.

Best book ever? No, but once I got into it I quite enjoyed the tale.

A missing investigative reporter case, turns to murder after the chance discovery of Barb McBride's car and corpse at the bottom of a lake. Barb's latest story - wrapped in secrecy until her broadcast - is the key to it all. Investigator Buck Taylor and his team dig into the world of child pornography and paedophile rings involving her family - her drunkard husband, Jim and her brother-in-law, Bob and some of the state's rich and powerful men.

It's a decent enough police procedural mystery with an engaging, if not a little bit too perfect lead investigator, Buck Taylor. Taylor's a widower, liked and respected by all his team and colleagues and with contacts throughout the state of Colorado, including the ear of the higher ups. Capable and intelligent he drives the investigation and propels the book forward.

The first portion of the book after the scene describing what happens to Barb, concerns a rapid investigation onto the double homicide of a couple of uniformed police officers. It occupies nearly fifty pages and in truth doesn't really add that much to the book, other than emphasising Buck's credentials as a decent investigator and a man with a heart and compassion for those less well off and living on the fringes of normal society.

That done, we are then concerned with the disappearance and murder of our reporter. I liked the slow, steady discovery of information, the different strands of enquiry and the different skill sets of the team involved, as well as the tangential case which derived from the discovery of the car in the lake. There's a cyber aspect to the case, digging into laptops, recovering data, uncovering hacks and the planting of information, accessing phone records as well as the normal legwork of face to face interviews and team briefs. On the other side, there's those involved in the paedophile ring, trying to clean house and avoid detection. Inevitably one side ends up disappointed.

Crime Exposed is the fourth in the author's Buck Taylor series after Crime Interrupted, Crime Delayed and Crime Unsolved. Crime Denied, the fifth in the series was published recently.