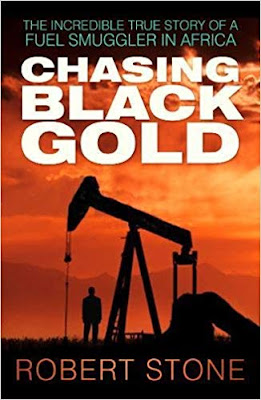 For two decades Robert Stone made his living on the high seas. A modern-day pirate, he was a pioneer saturation oil field diver, involved in fishing, treasure-hunting and, more than anything else, smuggling, which brought him more money than he knew how to spend. Stone spent the last ten of his smuggling years in Africa, where he traded in illicit fuel. The murky waters of the Niger delta were his place of business as he operated in the most corrupt regime in the world, a place ruled by money and guns. Protected by the military, he bought diesel directly from refineries and sold his black cargo to legitimate and illegitimate businesses all over the world, making millions of dollars in the process until his smuggling empire came crashing down thanks to a friend’s betrayal and the US law enforcement.

Chasing Black Gold is the incredible true story of Stone’s African fuel smuggling adventure. It is a tale straight out of Hollywood, one which throws the reader into a world where suitcases full of millions in cash are flown around the globe on private jets, where the corrupt practices of Third World governments and military regimes must be mastered, a world of numbered bank accounts and countries of convenience where living under false IDs and money laundering are all in a day’s work.

A bit of non-fiction to get my teeth into for a change and a bit of larger than life, Boy's Own modern day adventuring-cum-pirating. Robert Stone is definitely not a man who lets the grass grow under his feet.

The book covers Stone's business deals - legal, illegal and sometimes borderline - from 1988 until 1995, in various parts of the world - Nigeria, Brazil, New Orleans, Switzerland and a whole lot of other places besides. Short, snappy chapters, outline current events, business partners, friends and drop in elements of Stone's early history and his family life, such as it is.

Initially I thought I was going to dislike the tone of the narration and thus the main character, but it soon settled down into an engrossing, though slightly improbable read. I say slightly improbable, which probably reflects my own level of risk-taking. Stone must have balls the size of coconuts and an incredible amount of nerve and chutpah to have carried off even a quarter of his claims. 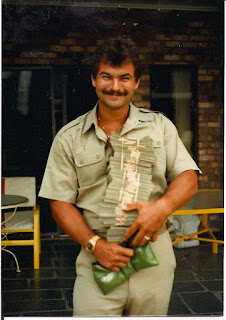 Well-written, not bogged down in too much he said, she said narratives of incidents and events. It had a flow which enabled me to pick up the pace, especially towards the climax of the book as Stone's lifestyle comes under pressure. US authorities in the guise of various alphabet agencies are on his trail and friendships are under scrutiny. Someone in Stone's inner circle flips and an element of paranoia prevails. Our man, with the assistance of his lawyers has to negotiate his trickiest deal yet.

The book was originally published in 2015 and there is a brief afterword where Stone discovers and discloses which of his friends ratted him out. I would have enjoyed a slightly longer chapter which offered some detail on what he has been up to in the past 20 or so years. Does he still possess the drive and fire of his earlier years, or is he settled and happy, living a quieter life with his pipe and slippers?

A decent read and a welcome diversion from my usual fictional crime reading.