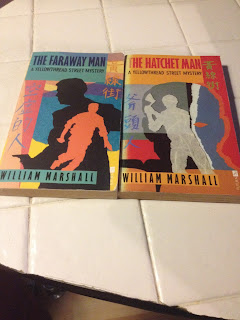 This week 2 from Australian author William Marshall (not to be confused with the 13th Century 1st Earl of Pembroke) and not an author I’ve read just yet,

Marshall wrote a 16 book series – Yellowthread Street set in Hong King. These were published from the mid-70s until the late 90s.

Apparently there was a British TV series based on the books, but I’m not familiar with it. 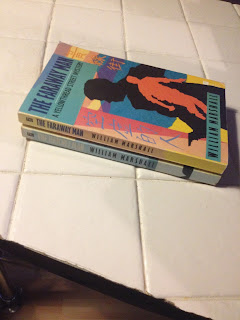 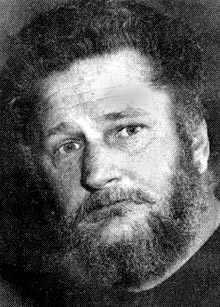 Interspersed with these were another 8 novels, but To The End (1998) is his last published work.
According to information I can find on the internet, he’s still with us. Born 1944, he’s in his early 70s now.

The Hong Kong books evidently combine violence, suspense and slapstick humour in his twist on the police procedural. 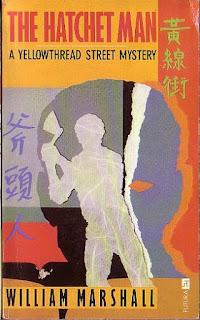 Postman Lawrence Shang was watching a film called The Axeman of Shanghai when his life abruptly ended. Carpet trader Edward Peng was enjoying The Last Picture Show. Death in both cases was instantaneous, caused by a small calibre handgun used at a range of two feet.

With their deaths begins a series of apparently motiveless murders in one cinema after another across the Hong Bay district of Hong Kong - and a nightmarish investigation for Harry Feiffer, Detective Chief Inspector, Royal Hong Kong Police Force, and his staff at the Yellowthread Police Station.

The Hatchet Man's next victim is a sailor off an American ship. Then a German is shot in an auction room. There's an unaccountable killing on a train near the Chinese border. And the crazy old Mrs Mortimer from the Old People's Home steps in front of a tram . . . And for Harry Feiffer, time is running out.

Full of real police procedure, suspense and fine irony, but with whole extra dimensions of the surreal and the poignant, the Yellowthread Street novels have no real compare. For those open to their charms, this series is a hidden masterpiece of crime fiction. 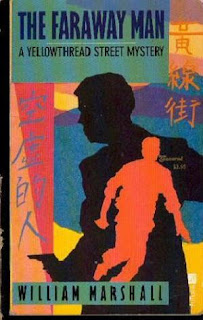