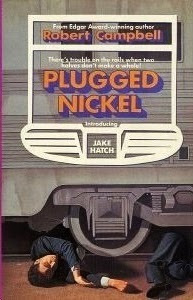 The night was pitch black, filled with driving rain when the California Zephyr jolted to a stop on a desolate stretch outside McCook, Nebraska. Somebody pulled the emergency brake, catapulting Jake Hatch out of the train --- and onto a severed corpse. He stumbled over the trousered bottom half. Someone else found the torso, neatly divided at the belt.


It was Hatch's job to piece together the truth. All he had to go on was a book of sonnets and a money clip in one pocket, and three cigarette butts and a lipsticked handkerchief in the other. And a plugged nickel, now hidden in his own pocket, leading him to a criminal mastermind, a case of espionage, and an almost perfect murder.

Robert Campbell was one of my first forays into crime and mystery fiction back in the late 80s/early 90s and he's an author I still have a soft spot for.

Plugged Nickel provided 220-odd pages of a fast reading mystery in the company of railroad detective Jake Hatch. As I read it, elements of the story came back to me, so I'm fairly sure it was a re-read - just long enough ago that the details remained tantalizingly out of reach second time around.

Hatch is on board a train when the emergency brake is pulled. Pretty soon half a torso is found, shortly followed by the other half - only a bit further down the road we discover that the halves don't match up and are from two separate bodies.

More searching ensues. All our body parts are eventually recovered as well as other bits and pieces - namely the Plugged Nickel of the title - which provide sufficient clues for Hatch to try and identify the victims and come up with a hypothesis for their murder.

Hatch with some of the facts at his command has to set up a sting operation to flush out the guilty, but not before another death occurs.

Easy reading, really enjoyable, an interesting setting with a lot of our narrative occurring in and around the railway, a great main character in Jake Hatch - a variation on the sailor with a girl in every port - there's a warm bed and a meal waiting for him at most of his train destinations. Clever use of one of his girlfriends to help unravel the mystery. Elements of humor throughout - a good time read!

I enjoyed this one just as much second time around.

In his lifetime Robert Wright Campbell (died 2000) wrote around 30 books, mainly in the mystery genre. There was a second Jake Hatch book - Red Cent which I have somewhere. I can't remember whether this one was read or not, not that it matters. It will be at some point.

Bought copy second hand no doubt about 25 years ago.