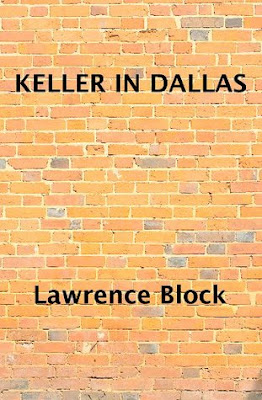 This novella continues the story of Keller, after the wistful stamp-collecting hit man retired in New Orleans at the end of Hit & Run. A phone call and an economic downturn is all it takes to put him back in business.

Keller in Dallas, a Kindle bestseller, serves too as the opening episode of Lawrence Block's brand-new bestseller, Hit Me.

I’ve only read the one Keller novel way back when and this fantastic story has me itching the read the series start to finish sometime soon.

Keller has married and has a family here and is retired from the hit man game. But with a stamp auction coming up and some lots he fancies and money a bit tight, one phone call is all it takes. He’s back.

Scoping out the landscape, sees him clear out the illegal help posing as authority asking for a green card. An unexpected nap throws his plans into disarray, but an ability to adapt and think on his feet sees the job done.

A bit of a kick at the finish when the dust settles. His promised double bonus has eluded him, due to matters of the heart – who could figure?

Lawrence Block, for the second month running, again offering 5 freebies in 5 days in February – this was one of them I downloaded from Amazon.
Posted by col2910 at 00:05