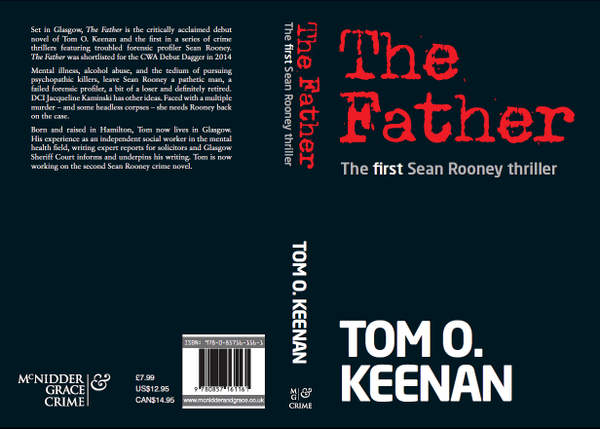 Shortlisted for the CWA Debut Dagger, 2014. Mental illness, alcohol abuse, and the tedium of pursuing typical killers, leave Sean Rooney a pathetic man, a failed forensic profiler, a bit of a loser and definitely retired. DCI Jacqueline Kaminski has other ideas. Faced with a multiple murder - and some headless corpses - she needs Rooney back on the case.

'Scottish noir at its best.' --The Crack

Well it’s fair to say, I’m not in agreement with the two reviewers above. The Father was not a book that worked out well for me.

I think my main difficulties stemmed from my inability to find any redemptive qualities in the main characters charged with restoring order and capturing, or at least stopping our killer.

We had Rooney, a retired profiler and ex-husband of Jackie Kaminski, the lead detective for our opening murders. I could possibly spend a week, listing what was irritating, unlikeable or downright annoying about these two individually and collectively, both in and out of the workplace. If you’re interested in reading about a man, with an inner voice carrying on a constant monologue with himself, whilst endeavouring to drink himself unconscious, before waking up the following day after having soiled himself, and then setting out pretty much to do the same thing all over again – this might be the book for you.

The ex-wife wasn’t much better. This dysfunctional and less than dynamic duo were charging around Glasgow tasked with bringing the controlling and manipulative evil genius - who was killing off various targets by proxy – down.

And the rationale for the killings? Unconvincing for me. Messages in Latin, a history lesson regarding ancestors and land clearances….zzzz

The difficulty reading, if you don’t empathise with the good guys and you haven’t got an emotional investment in the victims, nothing particularly matters.

I did like the Glasgow setting and the involvement of Glasgow’s criminal families in the tale.

Rooney’s jaunt to France to observe the parents of our guilty party, provided some temporary respite from the constant pattern of drink, self-analysis and self-loathing and arguments with the ex-wife as we trundled towards the conclusion.

A few bits that didn’t make sense to me – something about a photograph and something at the very end, which if people were minded to do, could in my opinion have been done much earlier on and to someone else and we could have all been let out of jail 100 pages earlier.

In places the writing was thoughtful and considered and made me pause…..

Rooney is drinking….
All of this is conducive to his self-abuse, his self-destruction by drink. He loathes himself, and drink takes him to places he doesn’t want to go, but can’t stay away from….his mind.

“What do I see? What am I? A mental illness. An alcohol abuse. A destroyed self,“ he says to the bottle……………What a pathetic fool I am.”

A dark book, maybe a Marmite book – either you love it or hate it. I claim to be a fan of darker books, but not this one. Usually, a way for me of judging my enjoyment is asking myself whether I would want to read more from the author……..probably not, if it features Sean Rooney again. A tougher question, if our characters were more relatable.

Paul D Brazill like this one a lot more than me. His thoughts are here.

Keith Nixon - ditto, but not as much as PDB. Here.

Thanks to the publishers, McNidder & Grace for my copy.